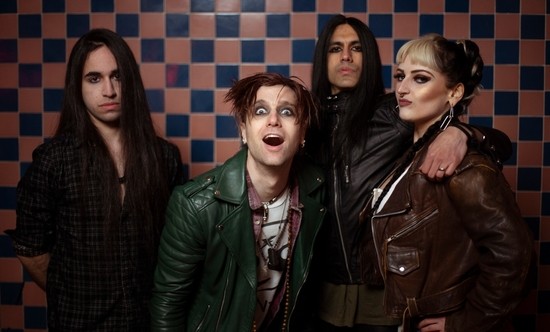 Makes My Blood Dance can not seem to sit still. Single after single, live show after killer live show, they’ve made a name splicing and mutating the genes of metal with disco, glam, and electropop. Lead vocalist and founder Evan Russell Saffer and guitarist/synth player John Polimeni rip open and hotwire genres at will, whatever the songs demand, like self-taught chemists slowly losing it in a condemned lab. Joined by Filia Luna on bass and backing vocals, and Alan Zaparoli behind the drum kit, the foursome make every track twitch like a fork in an outlet. To say MMBD are outliers in their home turf of Brooklyn is an understatement — they’d be out of place anywhere. “Power Of The Lightside” is just the latest example of their sleazy, riffy Viper Room grime that somehow – no really, how? – conveys a sense of hope, triumph, and empathy. Hear this band, because they hear you.

This time, these wayward souls mine metal’s roots for straight-up, melodic mayhem. A pummeling runaway rhythm and cobra-strike riffs give way to a chorus that’s up there with the best they or their contemporaries have ever committed to tape. For a genre given to frequent bouts of excess, every note feels absolutely necessary, every word and every lick is life-or-death. So, what do we have here – an homage to Skywalkers? Hobbits maybe? As usual with Saffer, there’s way more at stake here lyrically. Recovery is still not a go-to topic in Rock n Roll. There’s just too much self-reflection required. And the ability to walk the line between soap-boxing and self-loathing is incredibly rare. MMBD blast along that tightrope with ease and abandon, with a track that’ll kick you in the teeth whether you know the words or not.

Saffer conceived the visuals to accompany his very personal tale of survival and keeps it enjoyably chaotic and just plain weird, rather than miring it in doom and gloom. It is, after all, about what comes after the fall. He assembles a motley workout class barely clothed in thrift-store gym chic. They sweat it out after hours against shabby brick walls under cold blue light. Saffer pulled the cardio routine from his own story, about being in the wrong place but doing the right thing. Meanwhile, the band does what they do best, tearing up the stage and testing the soundproofing of a packed little rock club in front of pogo-ing fans. The punters and the downward-doggers sway along as the band barks “Dig out the truth,” which is exactly what this dynamite track manages to do.