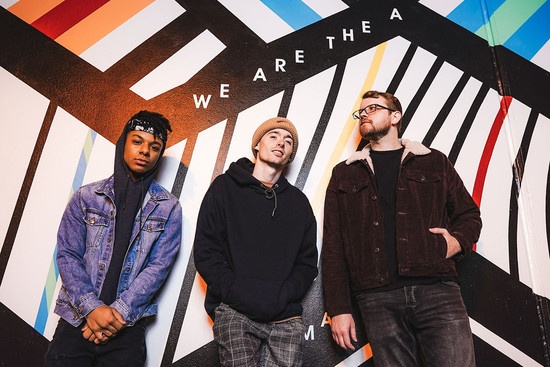 Alone time is good (for the most part); we have the chance to self-reflect and organize our minds. Yet when thoughts manifest due to excessive alone time, it is us that decides what to do with those overwhelming feelings. Happily, Forrest Kleindienst of Forrest Isn’t Dead channeled his thoughts into lyrics and lyrics into music. Growing up with a single mother and limited resources, Kleindienst preoccupied himself with skateboarding and music. And when he first discovered the liberation that music gave him, the Atlanta native submerged himself in it and never looked back.

The alt-pop trio refined their sound after Kleindienst partnered with guitarist Matt Vassy and drummer Zendé Murdock. The band name has both a literal and figurative meaning: it is coincidentally Kleindienst’s first name and also similar to Vassy’s middle name, Forrester. Yet, Forrest Isn’t Dead, is also a play-on of the hardships the members went through, despite the rough times, they powered through by creating music that showcases all of the ups and downs.

There’s nothing better than taking an outdated landmark and adding a (trippy) modern twist. Forrest Isn’t Dead shot the music video for “The Light” in Atlanta’s notable, Videodrome, an old-school video shop that has outlived Blockbuster and refuses to fall victim to streaming services. Neon lights accentuate the musicians while acid tone textures blur and multiply everything we see. Kleindienst continuously refers to “here,” the place where his mind seems to be stuck floating in limbo. His eyes gaze off into the distance and never fully greet the camera; the idea of “here” and meeting someone at “the light” is becoming more and more comforting as the visual effects become so prominent it’s hard to distinguish the members and their instruments apart.