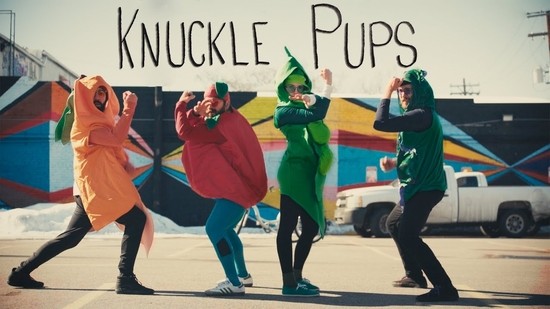 There’s a very moreish, anthemic quality to California and a real summer-feel that we are definitely vibing with during this isolated summer.

Growing up in the DIY punk scene with bands like Defiance, Ohio, Latterman, & Ps. Elliott (see: Swearin’ & Waxahatchee), while still listening to the indie-rock cannon, including bands like modest mouse, Sufjan Stevens, The Mountain Goats, Mirah, and Neutral Milk Hotel. Principle songwriter, Oliver Holloway, could never pick a side… so he decided not to. Knuckle Pups sits squarely at the intersection of DIY punk – and indie rock.

This is the first single from Denver Indie-pop band Knuckle Pups’ debut album. Produced by Rich G. at the Ghost House Studio, the song is a mesh of pop production with a banjo hook and lush vocal harmonies. Oliver Holloway’s lyrics evoke strong emotional images, citing Holloway’s struggle to balance his role as a caretaker for his terminally ill sister and his artistic vision. The song is furthered by the incredible music video filmed by Holloway’s former student. At a mere 20 years old, Jamon Tolbert shows incredible promise with his cinematic film-making skills. The music video for California is a must-see.