Soft Palms, the brainchild of wife-and-husband duo Julia Kugel (The Coathangers, White Woods) and Scott Montoya (formerly of The Growlers), have announced the impending release of their self-titled debut album on July 31st via Everloving Records. The album is a feast of rich sounds and simple, comforting melodies threading together sock hop rock n’ roll, scrappy dream pop, and ethereal torch songs into a sultry, spacey, and sublime journey towards brighter horizons. The entire album gives off an aura of intimacy while also creating a broader, pastel colored world-a duality achieved through Montoya’s unique and meticulous recording process at the couple’s home studio the Centre Of Mental Arts (COMA), and the magisterial mastering job by longtime friend and collaborator Mick Boggis (Pogues, Mötorhead, 12 Monkeys, Joe Strummer, etc.) who has served as a mentor throughout Montoya’s recording career. 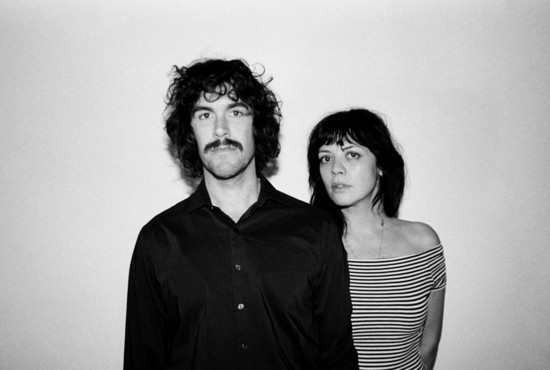 “My goal was to create something that sounded like a mental hug, a sonic embrace,” says Julia Kugel. “Everything can feel so wild and out of control, we really wanted to create something you could sink into and use to calm those emotions.” This is clearly felt in the album’s first advance single “Rainbows” where Kugel’s lilting voice floats against a backdrop of hypnotic upbeat instrumentation and Montoya’s dubbed out studio effects. The song comes paired with a shimmering music video the duo shot themselves at home, evoking the same DIY spirit that drove the album recording.