During the group’s endlessly inventive two-decade run, Snuttock has covered miles of territory. They’ve made electronic music in nearly every cutting-edge style, and they’ve excelled at all of them: dark industrial detours, wigged-out experiments, synthesizer meltdowns and ambient cooldowns, and bleak mechanical fantasies that teeter on the edge of madness. But we don’t think they’ve ever captured the spirit of the new wave and ravishing synthpop any better than they have with “Stay,” their latest single, and the first track to be released from the upcoming album of the same name. Think Depeche Mode at their most lavish, or the passionate side of OMD, and you’re halfway there. The other half is entirely Snuttock’s own. 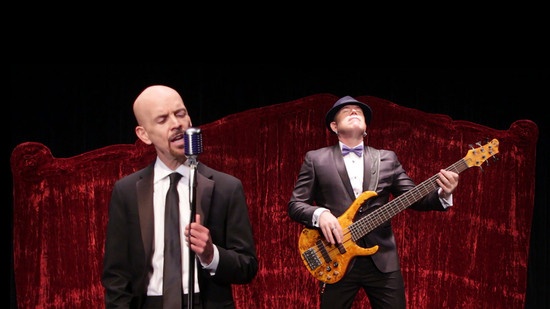 Of course, there’s always been a romantic streak that has run through Snuttock’s material. Even their darkest nightmares have always had sensual undercurrents, and no matter how rough they’ve played it, they’re never without an impeccable sense of style. Singer Bryan Lee and multi-instrumentalist Christopher Lee Simmonds are generous hosts, too – they’re always happy to escort newcomers into the world of sound that they’ve fashioned together. Once in, however, it’s not always so easy getting out!

“Stay” follows the rich, hypnotic Rituals Redux, the band’s fourth album. The double album was a demonstration of Snuttock’s flexibility, wide scope, and network of talented collaborators. For Redux, Snuttock enlisted the help of some of the most fearless remixers to push a fader – including Marsheaux, Metroland, SITD, Leaether Strip, and many others – to re-imagine songs from earlier set Endless Rituals. They’ve taken everything they’ve learned from that exercise in imagination and applied it to Stay, the most varied and most immediate album in their catalog.

It’s also their most playful. That sense of fun is apparent in Ernie Mosteller’s creepy – but always high-spirited – clip for “Stay.” This is a romantic video for sure, but it’s not without a looming sense of danger. Mosteller and the band also play with ideas of performance and artistic presentation: the clip nods to the circus and vaudeville, live radio, old-fashioned theater, rock concerts, magic shows, and even oil painting (some the footage plays in a digital frame). The central image in the video, however, is a rose – and the action turns on a woman who is, in many ways, the personification of a flower. Is she in jeopardy, or is she in command?