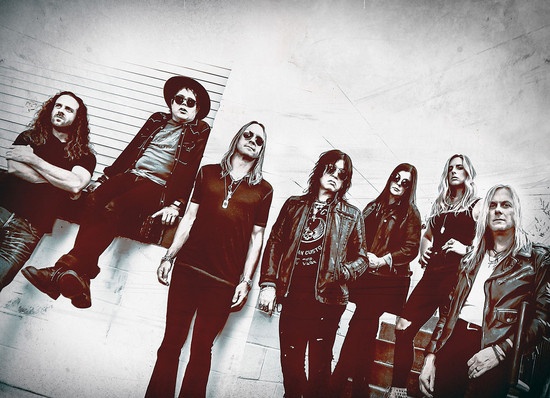 Rock music may sparkle and fade on the charts, but rock n roll – the spirit, the invincibility, the fearlessness? That lives forever. There might not be a better example of the unstoppable need to make music, to knock the odds on their ass, than Tom Keifer. His tale begins with the ridiculous success of hard rock heavyweights Cinderella. Their bluesy, no-BS stadium-shakers moved records to the tune of fifteen million worldwide and soundtracked just about everybody’s ’80s. Bad luck came for Keifer in the ’90s in the form of a paralyzed vocal cord, and numerous operations meant that the voice behind “Don’t Know What You Got (til It’s Gone)” and “Somebody Save Me” might never be heard again. Well, Keifer saved himself, powering through years of rehab and emerging with a voice every bit as powerful. The songs never stopped coming for Keifer either. His latest project, #keiferband, is a close-knit collaborative of fellow Rock lifers who’ve all seen their share of life’s exhilarating highs as well as the lows we all face at times. Together they channel those life experiences into some killer ballads and gritty stompers. The band’s latest singles, “Rise” and “The Death of Me,” are proof that they’ve got scorchers for days. #keiferband’s latest album RISE, debuted at No.10 on the Billboard Hard Rock Album Sales chart scoring two Top 40 singles on the Billboard Mainstream Rock chart.

Written by Tom and Savannah Keifer, with Shawna and Keifer Thompson of the mega country duo Thompson Square, rock and country collide in this symphonic piano-led soul-stirrer. #keiferband lay out a beautiful, simple truth set to power chords: life is good, but the unexpected lows are out there, and we’re going to have to pull ourselves up from them over and over. It’s a battle cry to the believers out there, and when the crescendo hits and Keifer belts it out, you know exactly who’s behind that grand piano. Staying true to the tune’s roots, #keiferband headed to Nashville’s historic Layman Drug Company, a pharmacy turned studio. Its checkerboard tiles, stark white walls, and matching seven-foot Bosendorfer perfectly embody the triumphant serenity of overcoming adversity.

Who could possibly take a roaring thunderclap of a track called “The Death of Me” and make it so inspiring, so uplifting? Answer: the guy with eight major hits and seven voice surgeries to his name. From the soon-to-be-smashed TV flickering a parade of Keifer’s many life challenges across its screen, to the way the band owns the stage they’re on, this one is a classic Keifer gut-punch. Written by Tom Keifer and Savannah Keifer, under the song’s barbwire groove and swagger, the message is again one of resilience and exultation. Keifer hopes that the viewer might project their own trials and tribulations on that TV screen and imagine smashing them in to oblivion with headbanging fists in the air. Ink.19 is dead-on when they call Tom out as “an artist who knows no creative boundaries and remains in a league of his own.” With #keiferband, that hunger, those riffs, and that flamethrower of a voice are as insane as they ever were.