Marie B, vocals: Hello and thank you for the interview. My world is taking care of band business which is missing a whole lot without the touring. Fortunately, we are able to have band practice once a week. We follow the COVID-19 safety protocols of social distancing and less than 10 people. Two of us have experienced deaths in our families. We support each other and get into the music during rehearsals. I really look forward to that. And of course taking care of the dogs, Dax and Beefy. 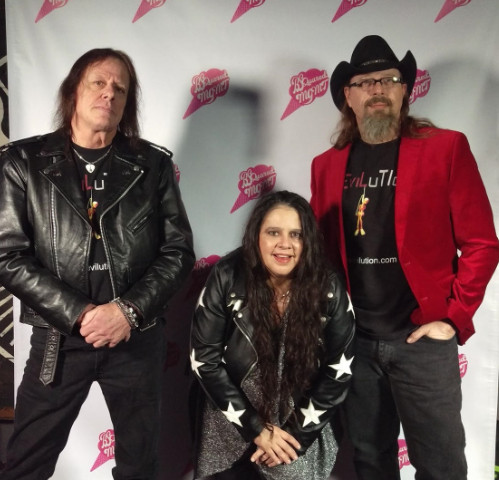 Scott Flint, guitar, vocals: Well, we now have a full line-up finally, which is huge! We can’t wait to start working again. And we’ve been writing and rehearsing new songs for the upcoming new album.

Dan Seitz, vocals, guitar: Even though we’re supposed to be under self-quarantine, my day job is considered “essential” so I haven’t gotten any extra time to work on music like I would’ve liked. So, I’ve been trying to use my time more efficiently so that I can get more music things done, like practicing my parts or trying to write new material. It can be difficult to keep perspective with everything feeling so unpredictable right now. I have to work harder to keep my primary focus on the music, and I’m grateful to Scott and Marie for making sure my priorities stay straight.

What is your writing process like? We would love to learn more about it.

Marie: My writing process usually is in conjunction with what is going on in the band. When we got “More Than Air” from Scott, he did a lot of work on it before he presented it to us. He made a preliminary recording so we have a feel for what he wants. Then we play it together. We add our parts based on that. In my case, I sang it several times and then one night it came to me what I needed to add. I got up and wrote it on my lyric sheet while I was thinking about it. Then next rehearsal I asked Scott what he thought about it and he said we could try it and see.

Scott: Our writing process varies from time to time, it’s usually one of us will come up with an idea and bring it in and then we all contribute to making the song complete. Other times, one of us will bring in a completed song ready to go.

Dan: I usually start with stumbling across a riff that sounds cool when I’m noodling around on my own. If playing around with it results in a fleshed-out rhythm structure, I’ll record a basic demo and then write lyrics for it. Sometimes it stands on its own after that, and sometimes someone in the band suggests a change that makes it better. Then it’s just a matter of practicing it to flesh out details like melodies and harmonies.

We are loving your song Phantoms – tell us more about the story behind it.

Scott: Dan will have to answer this question, it was written before I joined the band.

Marie: I know, right?! Every time I turn around “Phantoms” is on another playlist. Let’s see, Dan wrote the original lyrics and instrumentals. He recorded it. It sat for a few years till we had a full band. We toured with songs we had already written, recorded and published. Got noticed by BSquared Management. They helped us pick out some songs for an EP release. We traveled to Denver to record. While we were there we collaborated with Ricky Brewer who added some insight to it. Like, word inflections and subtle places where sounds should go. So, that’s the short version how that went. To the best of my memory.

Dan: “Phantoms” originally appeared on our second album, “Clues: $1,” which was recorded and released at a time when Marie and I were the only ones in the band. I was experimenting with different guitar plug-ins in our DAW and came across a neat flange effect that fit the riff I was working on. It only took me about an hour to write the whole guitar track, but lyrics eluded me for awhile, except I kept hearing “Chasing phantoms in the night” in my head for several days. That led me to consider how much misinformation was out in the world, how many people do things that benefit themselves while trying to convince the rest of us it’s what we want or need. And how we have little or no control over what the media exposes us to, so we need to be smart about what we accept as truth, and never stop seeking the truth, no matter how many “ghosts” we chase. When we got a full lineup together and landed BSquared Management, we were put in touch with producer Ricky Brewer who selected “Phantoms,” “Face Down,” and “Bastard” to record as an EP. The new version doesn’t have the flange effect, but the production is way better, and it has the benefit of having good musicians playing on it and talented engineer Pete DeBoer gluing it all together.

What has been your favorite creative outlet during all of this quarantine time? Any new hobbies?

Marie: My latest thing is I taught myself how to use the weed eater. I enjoy being outdoors and it helps me keep strong and focused to learn a new skill.

Dan: I’ve gotten back in to playing with my vintage stereo equipment, like making mix tapes on reel-to-reel or refurbishing a portable 8-track player to put in my truck.

Marie: Always make sure you can look in the mirror and love what you see. Also check in with your favorite bands and say hi. Let us know how things are going with you. It’s a lot easier to connect if we hear from the fans and since touring is not happening right now we need you to reach back to us. Also to have fun in your life.

Dan: You never fail if you never give up.

Scott: When this virus thing is over look out because REVILUTION is coming really hard and fast! “We’re gonna melt some faces!!!” You’ve been warned!

Where can we get our hands on your music and connect with you online?

Thank you for your time!

Marie: You are welcome and thank you!