Devon Worley Band has released the album “Teatime for Thieves”. The album features five songs: “Black River Magic”, “No Fool”, “Broken Record”, “Leave Me Slow”, and “Wytch Hunt”. Any listeners who enjoy classic rock, modern rock, and modern country music should give this album a listen. 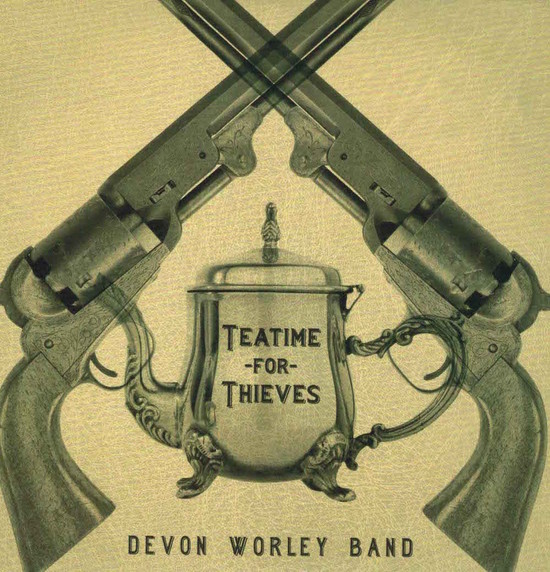 “Teatime for Thieves” begins with the song “Black River Magic”. The song opens with electric guitar and drums, before a female vocal enters. The first lyric, “She shines in the dark”, allows listeners to wonder what Devon Worley Band means. More importantly, it instantly gives the listeners the idea that the album will be thought-provoking and will contain carefully crafted lyrics. By the chorus of the song, Devon Worley Band introduces the idea of a woman having “that black river magic”, in that “She smiles while she holds you under/But it’ll kill you when she walks away”. Here, they are making it abundantly clear that the song is about a woman who has become an addition for her significant other. The phrase “black river magic” is repeated many times, making it no wonder why it is the name of the song.

The second song off “Teatime for Thieves” is “No Fool”, which starts with an electric guitar but provides an acoustic sound. The song begins with the lyric “You did me wrong”, leaving the listener to wonder if this will be a breakup song, or a song detailing the attraction to this significant other despite their wrongdoings. By the end of the chorus, the listener finds out it is actually a mixture of both, with the lead vocalist singing “Yeah I might miss you but being alone at home won’t drag me back to you”. The song sounds more funky than “Black River Magic”, allowing listeners to hear diversity in Devon Worley Band’s sound through listening to the first two songs.

The third song is “Broken Record”. Like “No Fool”, it starts with an electric guitar. Given the first lyrics are “You walked in/Like a magnet I was drawn/You pulled me in”, listeners instantly get the sense that this song is lyrically a stark contrast from “No Fool”. However, the narrative changes as the song progresses, where it’s explained that the narrator and the narrator’s significant other argue like a “broken record”. One of the most memorable lines on the album is found in this song: “I walk away/Because I’m addicted to you begging me to stay”. It is thought-provoking lyrics like this that demonstrate Devon Worley Band’s songwriting abilities.

After “Broken Record” comes “Leave Me Slow”, which starts acoustically and sounds closer to a modern country song than a rock song. Unlike the previous two songs, “Leave Me Slow” starts to speak of love positively, explaining how the narrator fell in love even though the significant other “tried to warn me”. By the chorus, it is revealed “Leave Me Slow” can actually be seen as a breakup song, with lyrics such as “I knew this was coming/But I thought that I’d be stronger”. Once again, Devon Worley Band has made a song where the general message of the song is a contrast from what the listener would expect through listening to only the first line.

The fifth and final song off the album is “Wytch Hunt”, which starts with heavy drums. In general, this is the most “rock”-sounding song on the whole album, including the usage of two electric guitar solos. The song is also heavy lyrically, tackling the end of the world. The narrator explains, “Baby when it’s over/You’ll remember my name”. Fittingly, this is likely applicable to anyone who listens to all five songs: when the album is over, they’ll remember the name “Devon Worley Band”, and for good reason.