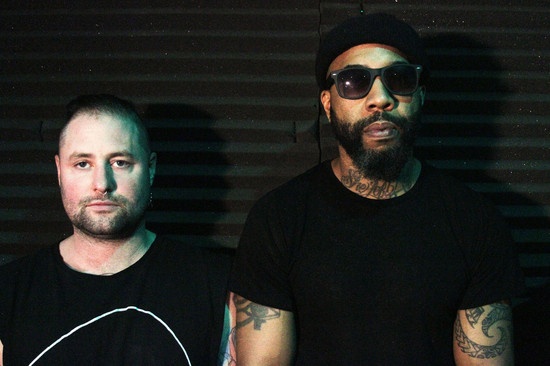 Punk has always been a warning about how much worse things could get, and now? We’re there – and Austin’s BLXPLTN are weaponizing their visceral, needle-burying proto-rock bursts to deliver the huge, nasty truth that the unthinkable is the new normal. They’ve soaked in the history and sonics of their chosen genre, echoing the political and musical bent of the likes of Dead Kennedys, Bad Brains, and Fear. But as acolytes of genre-benders like Ministry and Big Black, the need to kill convention poisons the blood of TaSzlin Rico Muerte and Jeremy Wolfe Kivett. In place of duct-taped guitars and banged-up kits, the two push drum machines and synths to within inches of their lives. “ZZEERRO (Dying for You to Get Rich)” is the latest case of what Fader calls “working-stiff punk… that makes me feel like punching someone in the face.”

There’s a live-wire immediacy to BLXPLTN because they tend to assemble these Molotov cocktails the second they get their hands on some gasoline. One morning, TaSzlin woke up and saw something terrible on the news. What was it? Take your pick of all the horrifying things we now choke down on the regular. He went into the studio and wrote this, the PhlegmTV LP’s first single. The two kick out an unforgiving feedback squall, a primal beating with megaphone vocals chanting anti-mantras, as if from a Unabomber shack behind a burned-out factory. But when the chorus hits, they manage to gouge out some serious melody amidst the chaos. When the nearly unfazeable Noisey tells you, “BLXPLTN are going to burn down the stage, the crowd, and your house,” pay attention: this tune is what they’re talking about. If you’re not already banging your head, a track like this will gladly bang it for you.

And the video? Talk about a bad trip. But if you’re at all familiar with these guys, you know they’re not gonna let you off the hook when it comes to the clip. The band appear as rattling, rotoscoped, color-inverted visuals ripped straight from a nightmare. TaSzlin’s screen time is especially disturbing, and way too close up. Flashes of line drawing animations go right for the throat, with an axe splitting some dude in two, rifles blowing kisses, and a cult bowing before a TV. Some old-timey stock cartoons offer no relief, because in BLXPLTN’s world, what was familiar is now to be feared. It surrounds the viewer, drowning all else out and drenching them in thrilling waves of acute existential dread.