Out of a haze of synth melodicism, a pulsating beat comes into focus riding a riptide of a rhythm that will form the bedrock of WARCRIES’ “Run for the Hills,” their first single of 2020, but as we sink deeper into the track, it becomes obvious that potent grooves are but a single gem in the treasure chest of texture and tone that this song has to offer listeners. Contrast is a main ingredient in the construction of every powerful moment in “Run for the Hills,” but the aesthetical conflictions don’t disrupt the even flow of the music (something that has been a bit of a problem for WARCRIES’ closest rivals in the mainstream these last few years). The drums are lush whilst the harmony they frame is unfiltered and full of an angry discordance that could make even the most dedicated of wallflowers want to step out of their comfort zone and swing, and whether you make a habit of hanging around the local nightclub or not, my gut tells me that the sonic cocktail contained here will have you seeking out the nearest dancefloor a lot sooner than later. 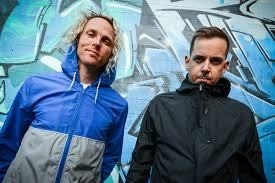 Electronica has evolved in a myriad of ways in the last ten years, but instead of adopting the minimalist trends so many of their peers have, WARCRIES seem to go out of their way to embrace elements of bombast that would just as soon be left out of the melodic equation by another contemporary artist in this genre. The percussion isn’t the only component spilling its fuzzy intensity all over the place in “Run for the Hills;” in fact, there are few areas within this track that don’t feature some degree of running-paint like textures, with the vocal melding into the body of the bassline as much as the drums become embedded with the synthetic groove at the forefront of the mix. This is a song that was meant to stimulate every part of its listeners – mind, body and soul – and though it’s far from the only electronic dance track that I would qualify as top notch this March, it’s perhaps one of the most diversely-appointed (not to mention sonically evocative).

“Run for the Hills” disappears into the silence with less of a cinematic eruption than it initially starts off with, but despite its mild conclusion, the three and a half minutes of club-level bounce it’s sporting has been stuck in my head since I first heard the song just this past week. I wasn’t very familiar with the music of WARCRIES prior to listening to this latest single, but now that I know who they are as a studio duo, and more importantly, what their artistic direction is all about, I doubt this will be the last time I check out their work. They’ve got a tremendous amount of chemistry being exploited in all the right ways in this release, and if they can continue to produce disciplined grooves like those exhibited here, they’re going to in this business for a long time to come.