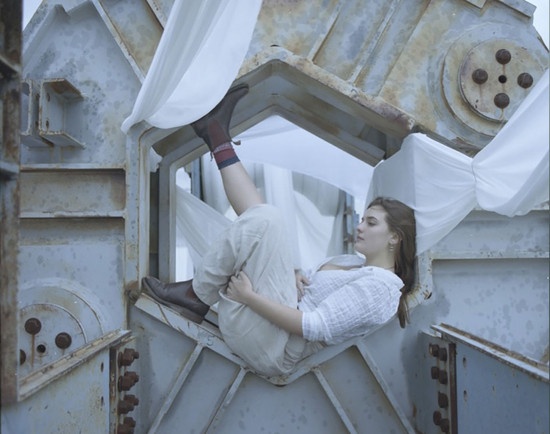 Young artists walk a hard road. Multi-instrumentalist/singer/songwriter/lyricist Lila Blue, it seems, has taken notes on whatever’s crossed her path, good and bad, in the course of her two decades of life on this Earth – so she’s got stories. She’s the rare artist who can make almost any instrument do her bidding, depending on which tale she’s telling at any given moment. She can string together an intelligent, moody, breathless ballad one minute, and coax a sweetly murderous surge of melody out of hiding the next. So what is this? It’s pop that refuses to be pop, folk that simply can’t play nice with other folks. She’s already released two albums and an EP, scored a few theater productions, and her style won’t sit still, taking whichever turns it feels like, leaving tales of raw confession and catharsis in its wake. “Grown Bones” is the latest example of Blue penning a track nearly impossible to pin down.

The triumphant, focused venom you hear in that sonorous, slightly unhinged voice is real, no question, and what’s the price an artist pays to be this honest with themselves and us? Pity whoever’s on the receiving end of this track, that’s for sure. The bow scrapes across coiled string progressions, the acoustic guitar slashes in and out over primal rattlesnake percussion. All the while, Lila’s vocals pace menacingly back and forth between angelic highs and ominous, throaty taunts: “You’re just a little boy stuffed into grown bones / Playing with the world until your mama calls you home.” The latest single off Lila Blue’s Leave Me Be is a mesmerizing declaration, announcing to a tormentor that there’s nothing keeping you around.

It feels like director Elise Durant just up and left Lila alone in the least welcoming and most desolate expanse of Joshua Tree. She’s fending for herself as the sun traverses the cold blue sky, keeping madness at bay in a tattered dress that must’ve once known a more precious, cautious wearer. She sings, acts out, and exorcises the poison running through her, crouching on jagged rocks, flailing and spasming against shadowy dunes or aside long-dead trees. She’s right back in the moment that inspired the song, far from civilization and any kind of comfort, geographically and mentally. Even when she’s moving like a modern dancer lost in a solo, or staring calmly straight through the lens, Lila Blue’s got an apex predator quality that unsettles as it hypnotizes. This isn’t a video you stop watching; it’s a video that lets you go when it’s done with you.