If you could send a letter to a younger version of yourself, what would you say? You’d probably want to impart some wisdom, or some perspective, or just reassurance that you were still there. Most of all, you’d want to reassure the kid that you were that she wasn’t as bad, or ugly, or foolish, as she sometimes feared she was. Keep your chin up, have a little faith – things get better. 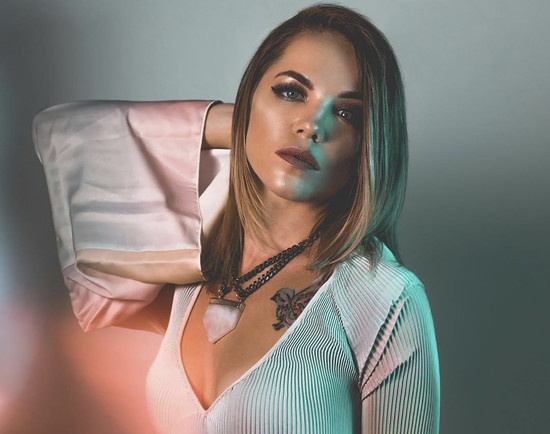 In Michael Gabriele’s video for “The Moon,” pop singer Natalie Major lives that fantasy. She comes face to face with her memories, and delivers a message of hope, persistence, and self-affirmation. Major shares the frames of the clip with a barefoot girl with a teddy bear and a heavy heart. They’re alone together in a great big house filled with ghosts, antiques, and echoes of the past, and Major’s sweet, clear voice is the only salve available. Is the little girl – played here with great sensitivity by child actress Rylee Jane Cummings – a version of the person the singer once was?

If so, she’s bound to be pleased by the woman she’s become. Natalie Major is an extraordinary pop singer: one whose voice possesses both power and grace, and who handles electronic material and aching acoustic ballads with equal poise. She’s beckoned thousands to the dancefloor, scored the emotional climaxes of television programs, and brought houses down with torch songs of immense confessional honesty. In a career that has taken her from Chicago to Los Angeles, she’s collaborated with EDM hitmakers Tiësto, Showtek, and Bobby Puma, placed songs on Station 19, Shameless, Grownish, and Camping, and even sang the national anthem in 2K’s NBA-themed video games.

“The Moon,” which will be followed by an EP of the same name, is the latest step of Natalie Major’s journey, and it’s an assured one. This is the kind of ballad we expect to get from established pop stars – one sung with great skill and an absolute sense of purpose. Natalie Major carries that intensity into the beautiful clip for “The Moon”: she’s a comforting presence, but a quietly mesmerizing one, too, sometimes lost in reverie, and sometimes overwhelmed by her own compassion for the melancholy girl she used to be. In one striking sequence, she is bathed in soft radiance as she sits at a tiny table while her small co-star pretends to serve tea. Major is invisible to the child she was, but her care and guardianship is evident, and, perhaps, powerful enough to transcend the limits of time.