Some of the most exciting music of the last half-century has been made at the intersection of folk and progressive rock. That these two styles work so well together shouldn’t come as a surprise to anybody: they’re both expansive and deeply narrative, and they reward artists who take chances and refuse to be pigeonholed. A great folk-prog hybrid is simultaneously approachable and ambitious, rustic and forward-looking. 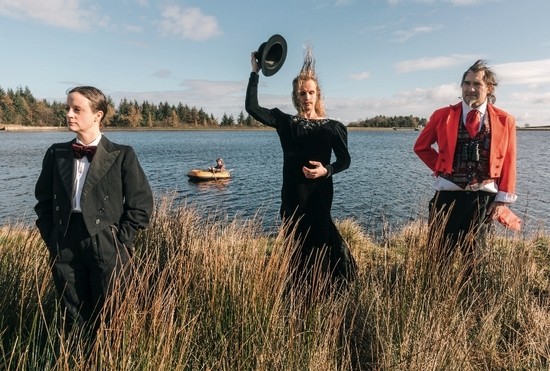 To the list of artists who’ve performed this alchemy with skill and dexterity, we can add the name Frogbelly and Symphony. The multinational quartet makes music that draws on the best qualities of the styles the band combines so effortlessly. They’re always defying expectations, they’re always welcoming, and they always exude offbeat personality. They’ve learned from the best. Guitarist Benjamin Trott was a member of the rebooted version of The Albion Band – one of the cornerstone acts in the British folk revival. The Albion Band were famous for taking folk forms and classic songs as jumping-off places for crazed and brilliant detours, and Trott has brought that inventiveness to his work with Frogbelly and Symphony.

Liz Hanley is a singer with the sort of crystal-clear, instantly ingratiating voice that has always been a hallmark of progressive folk-rock. Hanley is based in the U.S., but her view is an international one: she’s also a singer and fiddler for The Green Fields Of America, Mick Moloney’s long-running exploration of Irish music, storytelling and folklore in America. Frogbelly and Symphony’s rhythm section is rounded off by drummer, writer, singer and producer Ray Rizzo, whose resume starts with Josh Ritter, Bob Weir, Julia Stone, and continues with too many big names to count. A legendary New York City rocker, Ray’s talent and tenacity is a matter of public record.

“Benjamin Went Fishing” is the group’s radiant new single, and the first release from the upcoming Canis Major album, which was superbly produced by band leader and musical mastermind Thomas Lebioda. He plays bass and joins Liz on the band’s characteristic double-lead vocal parts

Hanley is the focus of the amusing Benjamin Went Fishing video. Keeping with the band’s aesthetic to share vocal and performance parts, the other members of the group get plenty of screen time and play their roles to the hilt, dressing in period costumes and romping around the British countryside.

The winning clip is the creation of frequent collaborator Juha Hansen, a gently experimental filmmaker and videographer based in Hamburg, Germany. Hansen is a celebrated photographer (he’s also a musician in his own right), who helps the group craft a visual signature that’s just as singular as its sound. His latest work for Frogbelly and Symphony is part pastoral, part detective story, and part testimony to the band’s wonderfully theatrical stage show.