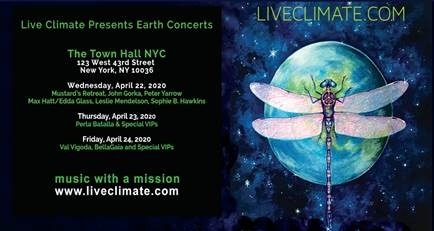 Live Climate came about as an homage to the upcoming 50th anniversary of Earth Day on April 22, 2020. The original Earth Day celebrated on April 22, 1970, spearheaded the modern environmental movement and led to the creation of the United States Environmental Protection Agency, and the Clean Air, Clean Water, and Endangered Species Acts.

These efforts and actions have taken us far- but not far enough. We have grown complacent, and forgotten that, indeed, to quote Joni Mitchell: “We are stardust, and we’ve got to get back to the garden.”

The 50th anniversary of Earth Day gives us a perfect opportunity to celebrate our stewardship of this beloved planet Earth. We at Live Climate want to offer a ray of hope and inspiration and provide an opportunity for a productive exchange of information into positive actions- through Live Music.

“Music has the power to bypass our brains and go direct to our hearts.” – Live Climate