We are an experience of the cosmos, artwork of life that embroiders networks of dreams. And in that design Anita’s music takes form, liquid light channeling towards the universal heights, familiar but not. Beyond the first step lies destiny mystified. We enter the world like shadows, aliens from our senses, only time will bring change, rendering us hole, turning back to pure light. Anita Ramona’s music comes before story and thought, when it meets your soul you hear the sound of a warm ray of light. 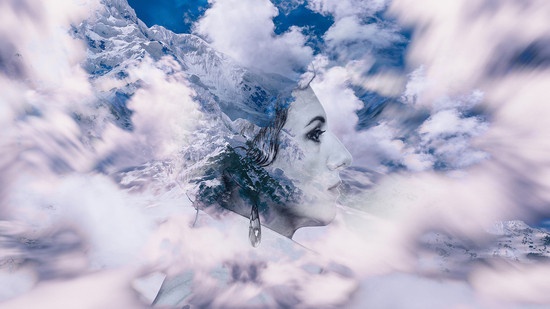 If Anita’s first two singles are figments of the same emotion, with the expressions of the same artistic enthusiasm, “Open Sky” travels to the province of tribute. I use to say that Anita Ramona becomes sound, disconnecting from matter, giving birth to the music of eternity. Usually music is similar to the idea, an immaterial form, a concept moving through open minds. We discover an ethereal pop song, with faint influences of post-punk. Her voice has dark wave glimpses, a solemn tone manifesting the same pure light, because for some of us, the light that shatters the rainy clouds is more revealing than being blinded by the full force of the sun.

The fabric of “Open Sky” is much more settled, hooked somehow in a calmness we want to continue endlessly. You find yourself in her voice, infinite yet incomplete, witnessing a spectacle from afar, like a soul seized by stars that finds itself dancing with modern rhythms, among constellations and stars. There’s beauty here, conveying questions and disquietude, a weaving in boreal thread enfolding the world, covering everything, in strange perfection, like the virginal white dress shrouding the fairytale maiden. The frailty once lost is returning to the world, wanting to build dreams again inside us. This is where the quintessence of Anita Ramona’s creative act lives.