As you might expect, “Morning Dew,” featuring Negar Nick on Persian Kamanche, is a quiet, gentle piece of music. In addition to Nick’s Kamanche, this piece also prominently features piano. It’s a pretty and meditative recording of music. 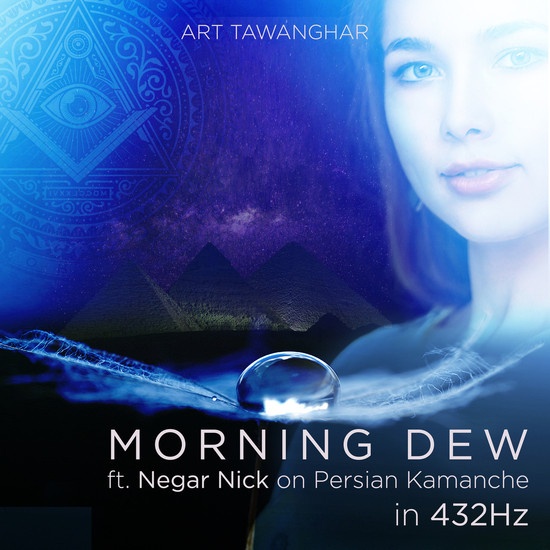 Dew itself is – as we all know – water that appears as droplets, which are usually only seen in the morning or evening. In the morning, they disappear as soon as the sun comes out during the daylight hours. Scientifically speaking, atmospheric moisture become condensed at a much faster speed than it can evaporate, which then produces these droplets of water. But you don’t need to know all that science just to appreciate this song.

This instrumental begins with tinkling piano before its orchestral string part enters in. It has all the feel of a jazz tune. In fact, it may remind you of George Winston, at the height of his popularity. Winston recorded for Windom Hill back in the 90s. This was when ‘New Age’ was as much a musical style, as it was a spiritual movement. Winston is a talented pianist, and many of his albums were nature-inspired (the way this one is), with titles like Autumn, Winter into Spring, December, Summer, Forest and Plains.

This music is played so quietly at times, one might begin to believe that – if the volume was raised to too high a level – the sound might scare away the dew. This is like seeing deer in the early morning out the window. One feels blessed just to have these beautiful creatures nearby, and nobody wants to take the blame for scaring them off.

The performers have said this song means either morning dew, or dew of God. This dew, ancients once believed, was actually substance left by Eos. The goddess Diana, in fact, was even called ‘the Dewy One.’ Such history makes you appreciate the dew a little more, doesn’t it? There’s more to dew than just the ‘dew’ that is the second part of the soft drink, Mountain Dew.

The creators also write of how 432Hz music is healing music. They call it, “Peaceful, empowering and soothing music and nature to nurture your mind, body, and soul.” That’s heavy! Music has healing properties. Nobody can deny that. Even if you don’t buy into the whole mind, body and soul nurturing aspect of sound, you can at least admit that a favorite song can suddenly make you feel good once it comes on the radio. How does it do that to us? How can music make us feel good, when nothing else does? Clearly, these musicians are on to something.

Even without over spiritualizing it all, “Morning Dew” is one lovely piece of music. It’s the sort of track you might put on while you’re enjoying the chilly morning light of a new day. A nature view is also comforting, so when you combine pretty sounds with beatific viewpoints, even the most secular individual can experience and uplift. And we all could use an uplift now and again.