The 2010s, especially as they drew to a close, proved to be a great time for vocal-driven pop music, and among the brighter stars to emerge from the underground in this aspect is Rob Alexander, whose new single “Friend of Mine (Elton’s Epic)” (the second from the 2019 LP Being Myself) has been raising eyebrows across the board this season. An indie heavyweight with a lot of vocal ability, Alexander is a full-time physician and a part-time musician, but you would never guess as much from listening to any of his work. In “Friend of Mine (Elton’s Epic),” he pursues a mantle created by the legendary Elton John through a humbly melodic croon that is woven into the fabric of a piano’s striking harmony almost seamlessly, and while he’s gotten plenty of accolades for his singing skills prior to now, I think this just might be the release to catch the evasive attention of certain ears on the mainstream end of the spectrum. Alexander has certainly earned the press, and he’s playing like a true professional in this most recent opus. 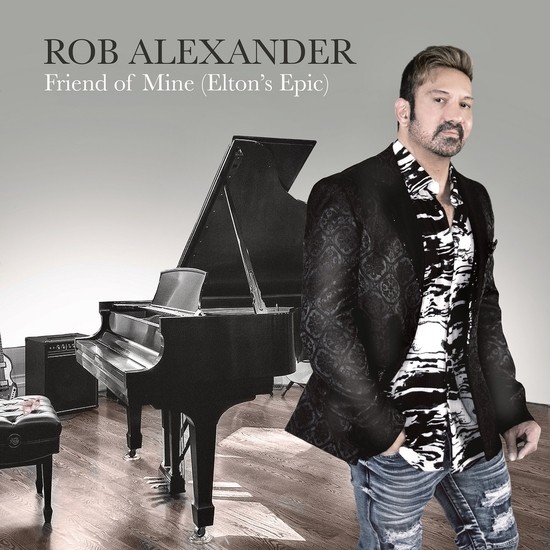 Being a storyteller is half the game when you’re a vocal pop singer, and with adult contemporary artists like Rob Alexander, it’s even more. Here, he’s telling us a story taken directly from Elton John’s life; his first American performance at the Troubadour Club in Los Angeles. Alexander recounts the events as though we’re living them ourselves, interspersing pleasant vocals with elegant melodicism from the backing band and a punishing pulsation from the percussion, together creating a tidal wave of tonality ready to wash anything negative away at the first sign of the chorus. He’s got so much self-control with his verses, and yet he isn’t afraid to go out on a limb and stretch his vocal as far towards the stars as he can without minimizing the impact of the instrumentation. Some would argue that he’s using a relatively basic setup for the band on this occasion, and I’d contend they’re 100% accuracy – from where I sit, it’s completely necessary if Alexander’s mission was to make his black and white words as integrated with the music as possible.

If you weren’t already listening to Rob Alexander before now, there’s a fairly good chance that you’re going to be hooked on his sound after getting exposed to the charming harmonies in store for all who press play on his new single “Friend of Mine (Elton’s Epic)” and the wonderful studio album that spawned it. This singer and composer hasn’t gotten nearly as much of the limelight as he’s deserved, but with all of the buzz surrounding the results from his most recent trip to the recording studio, I can see whereit’s going to be hard for his tougher critics to contain the hype that will inevitably be born of this track’s success. He’s still got a long way to go if he’s ever going to catch up to Elton John, but with music like this in his heart, he’s going to give us quite the powerful soundtrack along the way.