Art Tawanghar’s “Perennial Wisdom 432Hz” begins with just a few piano chords, which almost sound like the intro to The Mamas & the Papa’s “California Dreamin’.” However, only moments into the track, multiple mystical notes step in. Surprisingly, a finger snap rhythm is also added the track. An odd juxtaposition of old-world music and contemporary sounds is what’s created with this unusual collection of instrumentation. 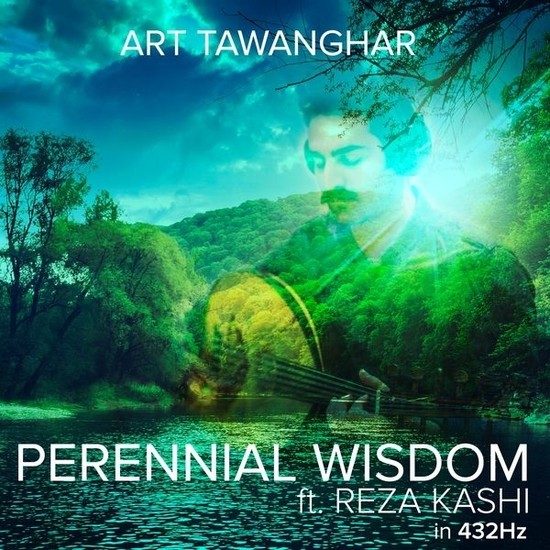 The track’s title is described as a context where “truth is that which leads us beyond alienation and isolation to integration and unity; beyond fear to love; beyond exploitation of the other to justice for all; beyond violence and fear to cooperation and peace; beyond the zero sum, winner-takes-all worldview of “us against them” to the non-zero win-win worldview of “all of us together.” There’s even more to it than that, but you probably already get the point. Although it is an instrumental, the track’s inspirational goal sounds to be nothing short of a wish for world peace. Needless to say, this recording is something much more than mere chill music.

The single gets much of its old-world flavor from Reza Kashi, who plays setar, tar and oud. Kashi began his musical journey in Iran in 1998. He’s a much sought-after instrumentalist, especially after once winning a tar solo competition in Iran. He’s since migrated to Australia, and now contributes to various Australian, Western and Middle Eastern groups.

Tawanghar has been described as a “composer, musician and multi-genre producer.” Although he’s probably best known for chill new age music, “Perennial Wisdom 432Hz,” however, takes his music to a whole new level. Yes, it is rhythmic, which is nearly an essential with contemporary instrumental music these days, but it also features plenty of Kashi’s fiery organic playing. It’s this recording’s crosspollination of styles and cultures that makes it something special.

Toward the track’s end, it features a dramatic orchestral-sounding build. It is here where the song takes on a cinematic feel. One can easily imagine this music being used for a movie soundtrack. Relatedly, one can also picture movie-like scenes in the mind while it plays. About a quarter of the way through, what sounds like Gregorian chants can be heard in the background. This adds but one more exotic element to an already extremely exotic sonic stew.

Let’s be honest, much of the contemporary instrumental music created these days is lame. It lacks a sense of adventurousness. Tawanghar, in contrast, shows he is willing to stir the pot, mix it up and experiment – not just a little, but a lot. Yes, the track is intended to explore wisdom in a deep, philosophical sense, but Tawanghar shows he is also wise to apply creative wisdom to his musical constructions. It’s clear much thought went into the creation of “Perennial Wisdom In 432Hz.” Instead of merely laying down a predictable groove, Tawanghar drew from a wide variety of sounds and instruments, to create something unique and special. It’s easy to have mad respect for what Tawanghar has done with this new piece. Call him a musical wise man.

Ancient Healing Frequency – Positive Energy Cleanse – Detox Your Heart with 639Hz Solfeggio Frequency. Peaceful, empowering and soothing music and nature to nurture your mind, body, and soul. Supporting and empowering you on your life journey. Music is tuned to 432Hz and contains the 639Hz Solfeggio frequency. These frequencies have a specific healing effect on your subconscious mind.

432Hz Music Resonates inside our body, releases emotional blockages and expands our consciousness. 432Hz allows us to tune into the wisdom of the Universe, Divine Intelligence, and our Soul. It creates Unity instead of separation. It expands our hearts and makes us more compassionate and loving. One thing is for sure. A person who resonates with love have inner peace – and this is the starting point for a world where we live in Unity, Peace and Harmony with each other and Mother Earth. Spirit Tribe Awakening We are here to serve you. To Inspire, Uplift and spread Positive Energy through music and Intention. To support you wherever you are on your journey. Co-creating more Peace, Love, and Happiness in your life, and the millions of people connecting with us. All our music (self-composed and licensed from other composers) is tuned to 432Hz and 528Hz, and contains Solfeggio Frequencies; Miracle Tones that Heal, Change and Transform low vibrational energy (negative energy). Letting go of negative thoughts and emotions. Recharging the LIGHT within you. Refueling mind, body, heart and soul with Powerful Positive Energy that aligns you with your Innate Power, Potential and Resources. When you RAISE YOUR VIBRATION you also help to raise the collective vibration of our beautiful planet and all life on it. You are important. You are important to this planet. You are valuable. You are a beautiful expression of Life. Powerful BEYOND words.