Concept albums are a massive undertaking that most bands avoid. But on their second record, DC’s Broke Royals had a story to tell – a big one – and knew they either had to go for broke or let that story go. There was no middle lane. To tapdance around the epic of Saint Luxury’s fall to Earth was to do her and her delinquent but determined cast of cast-offs so wrong. So, Philip Basnight and Colin Cross threw themselves headlong into this world and the lives of its unsung, unnoticed heroes. With their combined songwriting and studio chops, they’ve created a rock n roll headrush that’s just one all-or-nothing anthem after another. The Washington Post called it “an album of pristine pop-rock.” No Depression gave the Saint Luxury LP 8 out of 10 stars, Billboard praises Broke Royals as “sing-along, arena-ready,” and HuffPost proclaimed it their sound as “an energetic wallop of melody.” By the time you get to track four, “Love & Tatters,” the record’s got its hooks in you, and you’re in for its best offering yet. 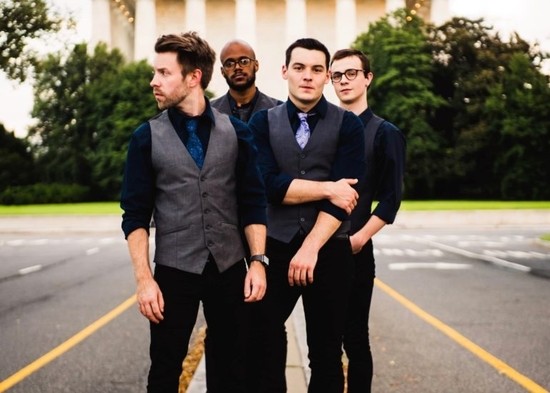 “Love & Tatters” lands a dynamite haymaker of a drumbeat on you right out of the gate, soon joined by an ethereal loop and chiming guitar that set the stage for a love story that’s messy, misguided, and most of all real. It’s a rock anthem that drives like it’s trying to escape its fate.

By now, we’ve all had it drilled into our heads that “love conquers all” – but singer Basnight knows conquest don’t come easy. There’s a dark side, sure, but in the hands of Broke Royals, it becomes breathless, light-headed pop perfection, an ever-crescendoing celebration song of us-against-the-odds. And think for a moment about how tall the odds are stacked against love. Against being able to open yourself up to it. Against making it work. Hell, against being in the exact right place at the exact right time to be able even to find that one person. And maybe then they’re the exact wrong person. But it’s just not up to either of you anymore. You’ve found it, you’re keeping it, and everything else be damned.

Welcome to the soon-to-be-upended lives of the couple in “Love & Tatters.” Saint Luxury herself may not make an appearance here, but her influence is felt through shimmering, supernatural bursts emanating from their electronics and their environments, pushing them forward, directionless but running, stumbling toward one another. They find each other in a field, and a stunning, disturbing climax, the opposite of the classic cinematic “Meadow Run,” reminds us that the supernatural Saint Luxury still takes place in the real world. Broke Royals’ go-to director, Scott Hansen, responsible for the visuals behind “Bad Chemicals,” “Higher,” and “As Long As I Can See,” intercuts the otherworldly love story with dramatic shots of the band rocking it out in a very Anywhere, USA setting that feels grounded, serene, the perfect contrast to the fantasy unfolding. Whether you’ve found love, lost love, or have yet even to find it on a map, the ending of “Love & Tatters” is going to stick with you.