Rachael Sage has a lot of history to call upon. Her career, spanning fifteen album releases over many years, but with this latest release, she is heading all the way back to the beginning, to her very first tour.

Putting Sage on tour with Ani DiFranco was a stroke of genius (hats off to whoever organised that one) – both are talented female musicians who are part of the LGBT community, who are known for being frank and outspoken in their lyrical content and supporting various charitable causes through their work. ‘Both Hands’, DiFranco’s best-loved song about the acceptance that comes with the end of a relationship, is a beautiful, vulnerable and intelligent song, upon which Rachael Sage has truly and firmly put her own stamp. 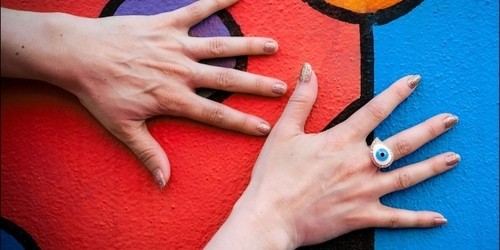 It’s an emotionally charged cover. Following a cancer diagnosis in 2018, Sage’s life was turned upside down and she was asked to climb this “most humbling mountain”. Part of a playlist to keep her spirits up and determination strong was ‘Both Hands’, a quietly confident song which assures that good times are just around the corner, if you can only hold out hope for long enough to see and feel them. The performance in this live video is therefore all the more tear-jerking, and the congratulatory excitement at the end of the take between the musicians in the studio is very much understood.

Already heralded as “musically unexpected”, Sage’s arrangement takes the staccato guitar of DiFranco’s original and transposes it into a beautiful string quartet, putting her unique stamp on this quietly outspoken cover version.

This cover follows the equally gorgeous ‘Bravery’s on Fire’, a universal anthem about finding strength in vulnerability which premiered in the US and the UK in American Songwriter and LOCK Magazine respectively.

This release is in advance of Character, a 12-song recovery album which is hotly anticipated, and due for release in Summer 2020.

Watch the emotionally charged live cover of ‘Both Hands’ down below: