We all love the whole “road less traveled” thing, but Dennis J. Leise is more of a “road never traveled by anyone ever” kind of guy. He’d been playing the clubs in Chicago, rounding out solid bills, pulling his share of the crowds, all the while paying out the nose for the privilege of Chicago’s noise and crime. So, he did what absolutely no one would do in his position, and set out for the greener pastures of… Gary, Indiana. And he found greener pastures: he plunked down for a small farm and started raising pigs, goats, chickens, and other animals. He’s done his time performing and recording with various country, jazz, blues, and rockabilly outfits, and No Depression described his recent offerings as “infectious,” with a “darker and sharper perspective.” But his move was a full restart, so while listening to Gospel music one Sunday on local radio, something occurred to him: you can believe in the music without believing in The Guy. So, he locked himself in the outhouse and wrote what was, as far as he knew, the first and only Atheist Gospel songs. But this is no self-righteous takedown, brothers and sisters; nope, it’s some good old-fashioned, rollicking, uplifting, sing-it-to-the-rafters Gospel about being good just because it feels so darn good to be good. 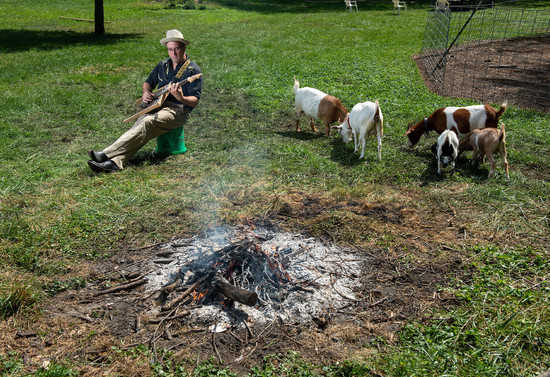 “Nobody’s Comin'” opens up in classic hymnal form, and that’s no surprise, as Leise is as much a student as he is a fan of every genre he moves within on the rest of the album. There’s a real sense of longing in his solitary vocal and empty-room piano. Soon, like a congregation streaming into the pews, he’s joined by shuffling drums, organ, electric guitar, and some perfect call-and-response backups. The switch flips to joy, excitement, and cautious optimism as Leise reveals all. All we can count on is our own sense of what’s right, and that’s okay. It’s a hand-clapping foot-stomper that avoids parody while leading Gospel into entirely new territory. Its come-one, come-all message and light bounce even feel a little like a full-band version of Peter, Paul, and Mary’s “If I Had A Hammer.” This inspirational tale of personal accountability is the first single off State of Fairs, Leise’s latest rootsy full length on his own Towering Gringo Records.

Leise, being a huge fan of his new hometown, wanted to incorporate a couple of locations that make it the cool little place it is. He and director Rob Fitzgerald cooked up a narrative that begins on Leise’s farm, where they cast his Preacher character’s flock as, well, his Flock. Pastor Leise has the collar, the revival tent and the glorious might of the Spirit of All That Is Good burning within him. One problem: those folding chairs are empty. Undeterred, he heads into town, strumming his Diddley-esque washboard custom guitar, to bring his message to the people. Fitzgerald, inspired by Leise’s wandering soul, roamed the city, chancing upon (and hopping fences into) just the right spots to shoot, like the amazing, graffiti-covered ruins of the abandoned City Methodist Church – a historical landmark in Gary and the state of Indiana. The whole clip sets the exact right tone for a raucous track that balances easy humor with a very real call to make a change in the world. There ain’t no angels, ain’t no devils. No salvation, no damnation. In these trying times, surrounded by snake oil salesmen, fraidy-cats, and phonies, “Nobody’s Comin'” might just be the song and video that save us all.