It takes a certain kind of guitarist to join The Smashing Pumpkins. Membership in that storied outfit requires a comprehensive understanding of musical genres – heavy metal, dream pop, electronic rock, shoegaze, gentle folk, brutal hardcore, and everything in between. Jeff Schroeder is the rare guitarist who can switch between those styles seamlessly and explore some utterly uncharted sonic territory as he does. In the Southern California rock band The Lassie Foundation, Schroeder established himself as a formidable six-string stylist, a majestic sound sculptor, and a courageous songwriter, too. So when a chair opened in the Pumpkins twelve years ago, he was a natural choice to fill it – and he hasn’t relinquished it since. 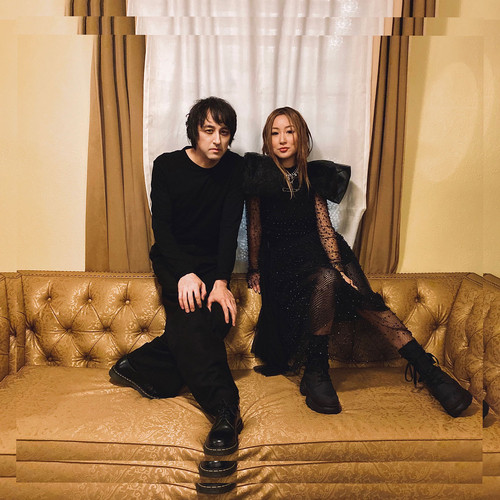 But the protean Schroeder has a surfeit of ideas and energy to burn. One project could never be enough for him. Luckily for us, he’s found a like-minded explorer: Mindy Song, a musician just as flexible and fearless as he is. Song is an accomplished singer-songwriter in her own right – one who puts her rigorous classical training to the service of some brilliant experimental rock and pop. Like Schroeder’s guitar playing, Song’s singing is broadly expressive and mercurial. She can go from a conspiratorial whisper to a wide-eyed howl in a measure; she can channel dreams and nightmares with equal confidence.

Night Dreamer, her collaborative project with Schroeder, is a dark alloy with remarkable tensile strength. Classical precision, rock fury, dance grooves, punk attitude: it’s all there in these explosive mixes. “Another Life” splits the difference between slinky, stylish rock and furious punk; “The Taste” is an irresistible exercise in avant-garde electropop. In both recordings, the two musicians shoot the works – Mindy Song sets the mood with vocals that are alternately seductive and deliciously blunt, and Jeff Schroeder caps the tracks with effects-drenched six-string solos with dangerously serrated edges.

Trouble lurks in the shadowed corners of the frames of the clips for “Another Life” and “The Taste.” Both videos are shot in a disused warehouse – the kind where the tiles are hanging loose from the drop ceilings. The clip for “Another Life” is a haunting introduction to these two musicians and is well worth getting lost in, but it’s the video for “The Taste” where the Night Dreamer vision is fully realized. The camera follows an urban explorer who discovers a vintage arcade game in a dusty corner of the warehouse. When she presses play, she’s pulled into a visual hallucination that mirrors her turbulent psychology – and the ride doesn’t stop until she’s reconciled herself with her demons.