Not content with latest single ‘Get Back to Love’ blowing up the airwaves, Kris James is now celebrating a massive career milestone in the form of a much-coveted billboard in Times Square!

It was with latest single ‘Get Back to Love’ that Kris James proved he is so much more than your average pop star. Originally shooting to widespread international fame with Liverpudlian band The Scheme, Kris James has since broken out on his own. Enjoying a string a top forty hits with ‘Eyes Open’ ‘I’ll Be Here’ and ‘Anymore’, James has now introduced us to a new type of song, having dubbed his latest track “a disco love song”. 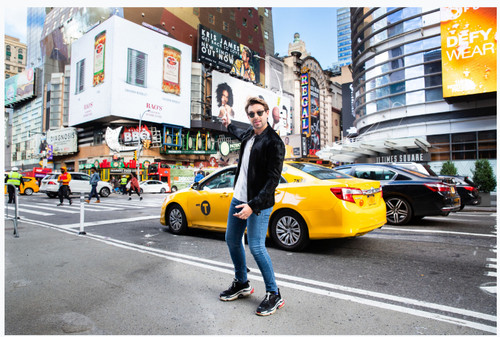 I defy you not to dance along to ‘Get Back to Love’, a song which is so catchy and different from anything else in the charts right now that it deserves its own celebration. Not content with this latest hit blowing up the airwaves, Kris James is now celebrating a massive career milestone in the form of a much-coveted billboard in Times Square!

This has been a lifelong dream for Kris, who posted a photo of him with the billboard on Instagram, saying that “as a little boy growing up I always used to look up to the Times Square Billboards hoping that one day my music might be up there! Today that dream came true!!! Don’t give up on your dreams guys.”

Inspirational yet humble messages such as this one are at the core of who Kris James is. Never forgetting where he has come from, James aims to use his music to spread messages about healthy relationships, revelling in the glory of love and spreading positivity, as we can see in his fun-filled music video for this upbeat track.

So what’s next for this recent Times Square sensation? Well, with heavy hints circulating about upcoming releases – did someone say debut album…? – in 2020, Kris James is definitely one to watch!