International Orange stands by the motto: “Guitar driven musical sunshine dancing to a global beat”. This band certainly has an international flavor due to the exotic rhythms that can be linked to countries such as: Brazil, Africa and India. With elements of jazz & funk heavily in place, I.O. is barking up the right tree with their latest album titled ‘A Man And His Dog’. 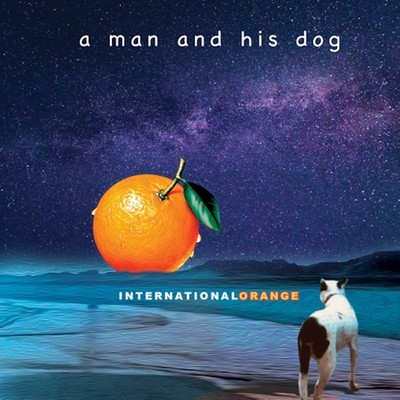 The group is comprised of four members: David Phelps on guitar & vocals, Todd Isler on drums & percussion, Leo Traversa on bass and Adam Morrison on keyboards. David Phelps and Todd Isler are responsible for starting up International Orange, so prepare your palette for a musical explosion. The NYC-based band offers plenty of flavor on ‘A Man And His Dog’ that is bursting with colorful notes. This album offers the listener a wide range of audio that covers a large spectrum of infused styles.

The record starts up with a song called “Keep The Blue Side” that contains a magnificent melody that is catchy beyond measure. Flowing along into the next track, “Olinda”, one will pick up on a richness that can’t be denied. Enter a stress-free zone on “How I Learned Not To Worry” where you can just leave your worries/troubles at the door. Track four, “Sookie’s Rhumba”, will have you dancin’ and tappin’ for days and continue to get your groove on with “Freight Liner” that is a peppy, jazzed-up and finger-snappin’ number. On the song, “Maracuja” a strong bass line is in place that is simply on fire. Track seven, “Sirabhorn”, provides a melody that moves ever so softly with added punch and then turn around and get hit with electric mojo at a feverish pace on “Strut Orange”. “The Penguin” marches on with out-of-this-world sounds & effects and then get ready for a super slick beat that is cool as ice on “First Principle”. The final installment is called “Gaku” and what a sweet sentiment and friendly finish this is.