Throughout the history of hip-hop, entertaining rappers have often come in pairs. Many of the most successful rap acts have been partnerships – unions between vocalists who complement each other effortlessly, and who enhance the talents of their partner. PM is a project like that, and once you hear “Touch It” and “Get It,” we think you’ll agree that the bond between Phi and Meisha is a powerful one indeed. If these two rappers are uncommonly frank, raw, and uncompromising, there’s a good reason for their confidence and their swagger. They know they’ve got each other’s backs. 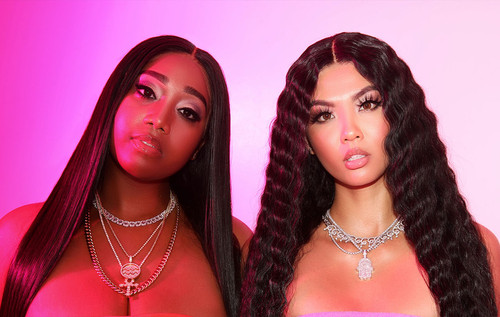 So it’s always been for Phi and Meisha, beginning with their childhood days together in Columbus, Ohio. They were buddies as kids – and now that they’re grown up, they’re still as tight as they’ve ever been. Even though Phi lives in Los Angeles and Meisha resides in New Jersey, their records demonstrate that physical distance can’t get in the way of the artistic connection they share. When they get together to rhyme, they do it with a single-minded intensity and that near-telepathic vocal chemistry that only exists between old friends. They’ve brought their adult experiences to the booth, too, and PM’s records glow with California heat and East Coast grit, as well as the no-nonsense Midwestern frankness that’s theirs by birthright.

“Touch It,” a fierce and fiery boast over an irresistible trap beat, is the current single, and it’s as searing and sexually provocative as any of the big rap hits of the summer. And because a small taste of PM is never enough, we’re pairing it with “Get It,” an earlier release that provides another two minutes and change of their powerful alchemy. In both songs, Phi and Meisha trade verses like best mates in mid-conversation. Best yet, you’re invited to listen in.

Although their voices and microphone approaches make them seem like they could be sisters, these two rappers don’t look alike. The electrifying clips for “Touch It” and “Get It” makes their backgrounds clear: Meisha is African-American, and Phi is Asian-American. They’ve got a similar taste in clothing, however – they enjoy tight-fitting outfits that accentuate their curves and highlight their allure. They’re dressed to kill in the “Touch It” clip: they’re a pair of mutinous workers in an ice cream factory who kidnap the boss, take over the car, and hawk their cool flavors in the way they want to. The “Get It” video is even more straightforward – it’s just two friends in a fast car, rapping their asses off, and having the times of their lives.