Gregory Suarez’s “Around the World” single begins with nice, bell tone guitar notes, which introduce a happily swaying, folkish tune. ‘Happy’ is the word that comes to mind, again and again, while this song plays. 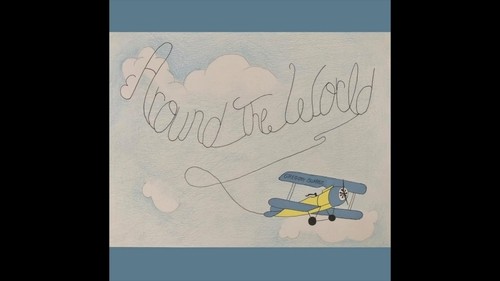 Suarez doesn’t have an especially commanding voice. Instead, it’s more of a light and airy instrument. He may not be a force of nature type singer, but he nevertheless sings with tangible sincerity. He’s singing from the perspective of one that’s found his Mrs. Right, and he’s just giddy telling us all about this romantic find with song.

Although Suarez is almost nothing like Van Morrison, vocally speaking, this song’s overall tone is a lot like a Morrison song. Morrison has always been one of the best artists at singing songs about his happiness – whether that be something spiritual or more temporal. Lyrically, Morrison is a tad more stream of conscious in his writing style, than Suarez. You get the feeling Morrison is writing many of his songs right there in the studio. Maybe he does. This is not the case with Suarez, however, who has obviously put together his words before putting them down on a recording device.

The song’s lyric promises to take a girl around the world. It’s a strong declaration of love. This guy doesn’t feel lonely or down whenever this girl is around. It’s a heartfelt and slightly confessional song. Suarez also sings about being able to solve the couple’s problems – they have time. A committed relationship is a marathon, not a sprint, after all. Whereas, it might be difficult to make a short-term relationship last when there are relational problems, a long-term relationship has a better hope of things working out over time. Suarez, admonishes at one point, “Please, no more tears, darling.” Suarez also sings about how this couple has recently gotten back together, after being split up. Clearly, this song about exploring the world together is not exactly a sure thing. Perhaps, this exploration Suarez is singing about is more metaphorical than geographic. They may not even get very far, in physical distance, but travel miles of emotional territory together, before all’s said and done. The other factor that might just cancel out a geographical component to Suarez’s intentions is that he doesn’t describe in any great detail at all the types of places where he’s like to travel. I mean, nobody just wings it when going on vacation; these are detailed plans. Thus, Suarez doesn’t sing about the places in the world he’d like to take this woman.

Even without much detail, though, “Around the World” is still a happy song. It’s heartening to hear such commitment sung about in song. It’s good to know songwriters are still inspired about fidelity. If Gregory Suarez ever does become a world traveler, it’s pretty obvious who his travel partner will be.