Eddie Grand is a living, breathing lifestyle brand- a walking party, if you will. Whether he’s cutting up tracks in his DJ sets, making hits in the studio or hosting his web-series, this one of a kind entertainer has been bringing his unparalleled positivity straight into the heads, hearts, and minds of all those who love to party. 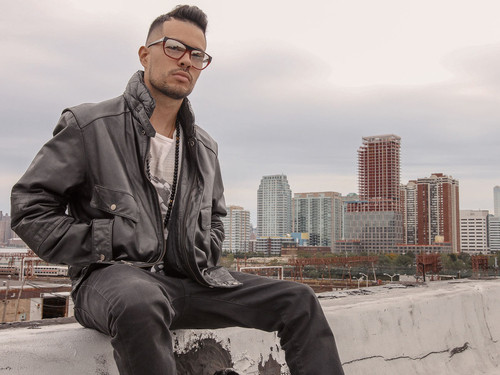 But when he’s not commanding crowds, he’s making serious moves. As word of his wild house parties spread, basements quickly turned into bars, bars turned into clubs, and clubs into festivals. He’s shared the stage with luminaries like Steve Aoki, Bingo Players, Odesza, Zeds Dead, and Joe Budden, everywhere from Brooklyn’s legendary Knitting Factory to Vermont’s winter music festival, Minus Zero Fest. So where to next? After more than a decade of experience in the music industry, Eddie Grand is ready to make real impact with his new release, “Slay.”

By now, Eddie Grand knows what a hot track – a real club banger – sounds like. While you were partying to his playlists, he was learning from the masters. That much is evident on “Slay,” an ode to the kind of woman who has no time for trifles. With an elastic, down-to-business groove, the lyrics were born to be sung out loud by the slayers running the dance floor – not to mention the guys on the sidelines checking them out, hoping for a shot. The song rides on a huge but subtle hook. Eddie knows the life, and he knows what gets the people’s blood going, with fists-in-the-air bars like “We don’t wait in lines, go straight to the front /I’m here all the time / we do what we want.” And… drop. It’s not all that hard to imagine, in a few short months, the whole club getting down to his swagger.

The world belongs to the enigmatic woman seen preparing for a big evening in a totally baller mansion with a pool and all. She moves with a deliberate, coiled intensity, not unlike the East Asian dragon tat that covers half her back. She tries on heels, outfits, jewelry for whoever that lucky guy is, relaxing in the chair.

But not so fast. Traditionally, the dragon is a symbol of wisdom, strength, power, and prosperity. It makes sense once she moves on to forging a passport on her laptop. And all that money she’s rolling around on all scantily clad in that giant bed? Might want to check that open, empty safe in the wall. We’ve underestimated her: she’s true to the title, she was never playing. Oh, and somebody better check on that guy who’s definitely not having the evening he planned on. Watch Eddie Grand turn expectations on their head yet again with his killer video for “Slay.”