Formed in 2010 in Montclair, NJ by childhood friends Evan Stephens Hall and drummer Zack Levine, Pinegrove have released three previous albums – Everything So Far (2015), Cardinal (2016), and Skylight (2018) – to massive critical acclaim, garnering them a widespread and devoted listenership. Hall named the band after a “beautiful and regulated, yet natural and messy” grid of pine trees on his college grounds. ‘The Pinegrove’ was a place of introspection, repose and spiritual serenity, and a place he had established to be creatively fertile. That influence – the peace found in nature and contemplation – is a theme in his songwriting. 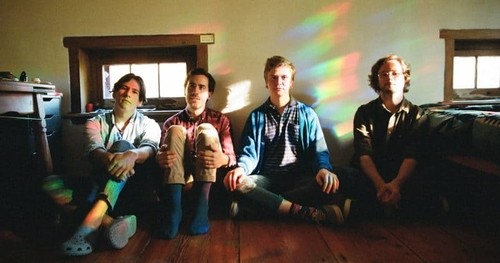 Marigold (01/17/20) marks their debut album for esteemed indie Rough Trade and offers what Evan calls a “heart-first” perspective. The album begins with a breath and ends with a shimmering exhalation. In between is an urgent, multivalent meditation – and an expanded take on the blend of alt-country, indie rock and cerebral humanism that’s inspired the band’s ardent fan community. Those familiar with Pinegrove will recognize signature elements of the band’s sound: literary yet conversational lyrics, geometrically interlocking guitars, the dynamic shifting shadows of rhythm and structure. Marigold is an album that’s intense but approachable, with a familiarity that belies an underlying complexity – accessible on first listen and increasingly rewarding upon revisits. Like its predecessor, it was recorded at Amperland, the living-room-turned-studio in the house Evan and multi-instrumentalist Nick Levine share in rural upstate New York.

The video for “Phase” is a first for the band. Having built their brand minus music videos it was like approaching a new medium as a blank slate. According to Stereogum, Hall says “The song ‘Phase is more or less about insomnia — trying to sleep but things racing in your mind… moving through anxieties & eventually, hopefully, into sleep.'” The video blurs the lines between awake and asleep as the central figure of the video aimlessly strolls through the city and his day, sort of like an indie rock Mr. Magoo, until it culminates with a face to face encounter with the band themselves.

While there is room for ambiguity in Evan’s hypnotic storytelling, its thesis is anchored as always in radical empathy. This is music that makes a humble yet confident case for inclusiveness and community, for tenderness and patience in a world that sometimes seems to have other plans.”This is a lifelong project,” Zack says, “We’re always thinking about how to be better humans and humanists. It’s about how to keep going, and to respond to the world as it is right now.”