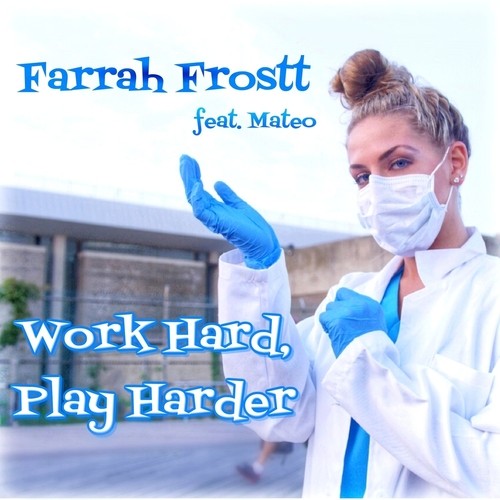 Farrah Frostt is one diligent woman but all work and no play makes Farrah a monotonous girl. “Work Hard, Play Harder” Featuring Mateo:

is the perfect solution offering up plenty of harmless fun & entertainment. Farrah Frostt is letting her hair down in the new video and enters into a world that is equipped with a carefree spirit and fun-in-the-sun mentality.

“Work Hard, Play Harder” is a follow-up to Farrah’s debut single/video, “Not In The Mood”, and I have to say what a fantastic job on this new release. The Miami-based artist is a rapper, singer, songwriter, SAG-AFTRA actress, model and medical student along with being a trained hip-hop, tap, ballet, jazz and lyrical dancer. Farrah is a lady of many hats juggling it all extremely well and making her the ultimate Superhero of today. With beauty, brains, strength and independence on her side, there is no stopping Super Frostt! The inspiration behind the song, “Work Hard, Play Harder”, actually comes from Farrah’s background as a medical student. In the video, you will see Farrah hitting the books and the beach making for a perfect balance between work & play. On the cover, you get Farrah Frostt in full doctor attire complete with surgical mask, white lab coat and blue gloves. From scrubs to clubs, Farrah Frostt proves she can do it all and then some! I sense star potential in this young, talented dynamo and so you can’t go wrong with the mighty Farrah Frostt. Here is some background on the music video from Farrah herself giving you a better insight into how “Work Hard, Play Harder” came about: “I wanted to stress a happy, healthy balance and also share who I am with the world. I work hard: med school is a demanding commitment. But I have a rule that I have to do something fun at least once a week—go to the beach, out dancing, clubbing, jamming, Netflix, movies, anything that brings me joy. I included educated women throughout the video standing tall and proud of their work. I am a huge proponent of female empowerment. The real stuff. Smart is sexy.” With that being said, Farrah Frostt is ready to take the music and medical world by storm!

The music video for “Work Hard, Play Harder” was filmed on location at Coney Island in NY, where Farrah is originally from, and directed by Rock Davis. The production company for this project was Itchy House Films and together they have created pure magic. There is a new “Genie In A Bottle” in town and her name is Farrah Frostt people! The song itself is upbeat & uptempo with Farrah adding a splash of Spanish Pop & Latin flare to the mix. The featured artist, Mateo, really added a nice touch with his smooth vocals adding to the strong Latin flavor of the song. “Work Hard, Play Harder” offers up hot beats, a playful vibe and a bounce factor that can’t be denied. The catchy hook on this song will have you singing along and dancing for days. I really loved the beach, boardwalk and fair imagery where Farrah Frost & company were bringin’ some Miami heat to Coney Island. The track and video just pops and has that fan-friendly, appeal factor. “Work Hard, Play Harder” is a perfect cure for those “Summertime Blues”, so just take a break for a minute to enjoy all of the wonderful sights & sounds.

Farrah Frostt is driven, determined and fearless where not even harsh, critical Kryptonite can slow down Super Frostt! “Work Hard, Play Harder” is just a blast to watch and listen to where busy life clashes with good times. From neuroscience to hip-hop, Farrah proves once and for all that you can operate your cake and rap it too! Farrah Frostt is a dynamic force and her video, “Work Hard, Play Harder” is a true testament to herself as an individual. While challenging herself and having fun in this life, Farrah’s dedication to it all is on full display. With the video climbing and approaching 20K views, there is nothing left to do now other than “Work Hard, Play Harder”!

Go after it, chase it and make it happen because Farrah Frostt says so!