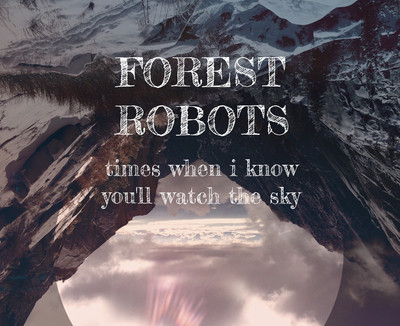 t’s worth noting how the name “Forest Robots” juxtaposes two seemingly disparate ideas. With the “forest” part, Dominguez is highlighting a love of nature. The music is inspired by nature and the way the outdoors looks and feels, as seasons change. This is organic, natural and beautiful – but only if you take the time to focus on the changing world around you. Therefore, this music is as nature-focused as, say, John Denver was back in the day. It’s unlikely Denver ever created instrumental music. However, Dominguez’s heart is essentially in the same space as was Denver’s.

Instrumentally, however, the word “robots” is a significant indicator. Dating all the way back to the pioneering group Kraftwerk, synthesizer music – the variety Forest Robots create – has been associated with a sort of sonic artificial intelligence. It’s likely the reason why so many science fiction movies utilized synthesizer sounds to create soundtrack music. Electronics have always best expressed an advanced scientific vibe, and Forest Robots carry on that tradition.

Thus, Times When I Know You’ll Watch The Sky is, once again, Dominguez’s way of uniquely combining ‘love of nature’ ideas, using sci-fi musical tools. If you use your imagination, you can capture a little of Dominguez’s emotions. “The Clouds That First Gather At The Mountain,” for example, features a relatively aggressive percussion part. These beats mirror the feel of a heart racing at sighting something truly breathtaking. You get the sense Dominguez composed this one after an especially memorable cloudburst. It ends, naturally (no pun intended) with the sound effect of a rainstorm. “The Last of The Melting Snow,” however, is quieter and gentler. It’s a reaction to a gradual change in the atmosphere, which is happening slowly and almost unnoticed. This track is a mere 1:28 and is over almost before you even know it. For what might be termed the default title track, “Time When I Know You Watch The Sky,” Dominguez gives us a thoughtful, moody meditation. It’s quiet and sweet, reflecting the feelings of, say, stargazing at the infinite night sky. With its relative lack of percussion, it’s clear that – at least during this moment – one’s heart is no longer racing. It’s nearly a silent physical pose, sitting in the lovely midst of nature and simply taking it all in.

Of course, song titles are only suggested interpretations. Dominguez may have had entirely different notions in mind while composing these tracks. Nevertheless, these song names sometimes more than hint at their meanings. Whatever the case, there will always be an awkward circumstance whenever advanced man encounters ancient, relatively untouched nature. Dominguez will always be in awe of nature and may continue creating music reflecting this awe for the rest of Forest Robots’ career. If that happens, it can only amount to something good.