Macaco, a band from Barcelona, Spain, has released the video for its single “Blue (Diminuto Planeta Azul).” It’s a fascinating visual, which begins with a look at a beautiful, pregnant woman, as well as a zoom in from outer space — right down to planet Earth. The chorus, to this song (mostly) sung in Spanish, includes the word ‘blue.’ One can safely assume this colorful chorus refers to Earth’s nickname of being the blue planet. It earned this nickname because about 74% of the surface of Earth is covered by liquid or frozen water. This is one big reason why Earth can be a habitable home to so many species of plants and animals. 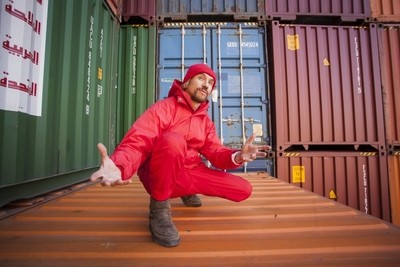 The most important specie addressed in this song’s video, though, is humans. Perhaps there is a connection between the liquid-filled planet and the pregnant woman’s womb. After all, the birth process goes into full swing once a mother’s water breaks. There’s also a repeated scene of a child in a bathtub. Later, there’s a scene with the pregnant woman with a globe image visible on her large, pregnant stomach. Just as Earth is the birthplace of many forms of life, so too is the womb the birthplace of human life.

Furthermore, there are many scenes of people looking up into the sky. They’re looking out into the blue, at the large edge of the universe we can see with out naked eyes. Although it’s difficult to make specific interpretations of this Spanish-language lyric, it’s clear this song is (at least in part) an exploration of the mystery of life.

Dani Carbonell formed the group Macaco in 1997. He was originally one of the lead singers in a new flamenco group called Ojos de Brujo. He left that band after its debut album, Vengue, in 2001. Nevertheless, he continues to guest on that act’s albums to this day. Carbonell is quite talented. He sings in Spanish and Catalan, as well as in Portuguese, French, English and Italian. He is joined by an equally talented individual on this song. Jorge Drexler is a musician, actor and a doctor of Otolaryngology. Otolaryngology, in case you’re wondering, specializes in treating head and neck surgeries. Drexler is also an acclaimed composer. In fact, he became the first Uruguayan to win an Academy Award for composing the song “At Otro Lado del Rio” for the film The Motorcycle Diaries in 2004.

This single begins with a spoken word intro, which leads into a lovely, traditional-sounding instrumental intro. The song’s vocal is sweetly gentle and thoughtful. It’s a ballad, with pretty singing and unobtrusive instrumentation. Its mere existence drives home that point that wonderful music is being created everywhere around the world. Not too long ago, world music like this could be only heard on public radio stations, in foreign films or poorly stocked world music sections of record stores. The internet has opened the world of music to us all. A kid from Los Angeles’ inner city, for instance, can discover a song – like this one – simply by surfing YouTube. In many respects, we still live in a beautiful world.