“Be My Main,” the latest single from breakout R&B vocalist Allocai, opens in a churning echo of its title verse, slowly ascending into a larger than life anthem of desire that transcends the standard limitations that most of us associate with mainstream pop music. The beats are accented with a finger-snapping that contributes to the lush backdrop of the track without taking any attention away from the real draw in “Be My Main;” its cratering serenade. As evocative as the first few bars of this song are, it’s but a teaser of what’s about to come in the next couple of minutes that it dominates the air around us with nothing more than a divine groove and a tidal wave of tonality. 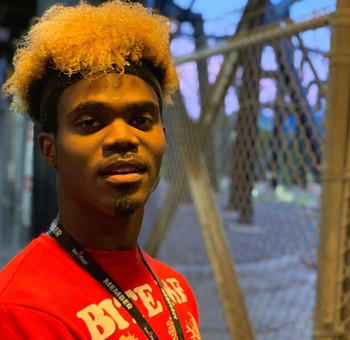 A keyboard’s ghostly melody bolsters the tension as we get closer to the chorus of the track, but the biggest provocateur of emotions in this piece is the lyrical content. Allocai is desperate to be heard here; he’s begging for a little bit of clarity in his romance, demanding a response from lover, and at the same time bearing his soul to us as if to ask for the approval of the audience. He’s tortured, sick of the repetitive social cycle, and more than anything else, looking for some understanding amidst a world that appears capable of doing anything and everything but. His willingness to be vulnerable with listeners at such an early stage in his career is inspiring, and judging from his sincerity, something that we can expect to hear more of in future outings.

Allocai has experienced a lot in his time on this earth, and for being a fresh face to the recording business, he exhibits literally none of the amateurish jitters and stylistic struggles that his peers tend to. He’s going after the verses like his life depends on it, and though there are some elements of his sound that could be attributed to generational influences (i.e. the eclectic hybridity of conflicting grooves), I think that he’s one of the more original performers to come out of his scene in the last few years. He’s rolling like he belongs in the spotlight here, and that’s unquestionably part of the reason why his sound is so addictive in “Be My Main.”

The instrumental glow of the rhythm fades into silence and this most recent release from Allocai comes to a conclusion, and despite its short playing time, “Be My Main” sounds a lot more anthological than most three-minute pop songs are. I’ve been hearing a lot about this artist in the last year, and he’s definitely living up to all of the hype surrounding his output in this single. It’s not that there’s anything particularly revolutionary about the sound that Allocai is producing right now, but that his talent is of such a unique strain that his music stands out like a diamond in the rough. Winning the hearts of critics hasn’t been an issue so far, and I think it’s going to become even easier for him following the release of “Be My Main.”

The music of ALLOCAI has been heard all over the world due to the radio plugging services offered by Musik and Film Records. Learn more – https://musikandfilm.com