Some of the best pop songs come from a place of torment. For frontwoman/vocalist Trish Jetton of HIRIE, her latest single “Message In A Bottle” is a new fiery tropical pop tune that tackles the struggle of addiction and indulgence. It’s the fourth single to be taken from their upcoming third album Dreamer, which will be released on Megaforce Records on September 13, 2019. Revealing the inspiration for the track, Trish explains, “One of the most personal songs on the album, it depicted a time in my life where I was literally drowning in my emotions and bad habits. It was easier to pour the next drink than to face the reason why I needed another. I’m hoping that anyone going through a similar addiction can realize the power they have to turn around no matter how far off the deep end you’ve gone.” 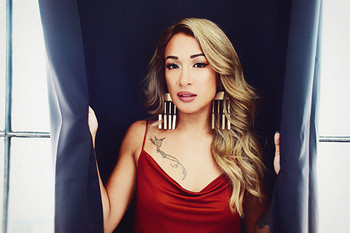 For the accompanying video Trish teamed up with LA-based Director Hans Boysen who took her words very literally and created one of her favorite videos to date. It starts out with a character who is unsettled, writing something of a goodbye letter and then filling up a bathtub with water. The video continues with the character struggling through her emotions portrayed in dance. “You see the tub filling with water and eventually she steps in and is astro-projected into a watery universe,” Trish explains. “The metaphor behind this was that every indulgence you give into – every pour of the bottle, eventually drowns you. In the video the character gives in, but only to realize she wasn’t done fighting. She pushes on the glass that’s keeping her in the dark only to find as she’s giving up, that her purest self was always there to take her back.”