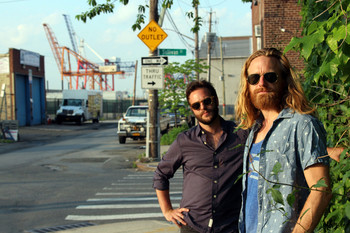 A big – happy Friday to all out there – it really does not get much better. Today we have an awesome group of musicians from Brooklyn, NY joining us called – FUTURIST. FUTURIST is a 5-piece “Psychedelic-Pop, Alternative/Art Rock” rocket ship launched in Brooklyn, NY, whose unique take on psychedelic rock, dance-able grooves, and earnest songwriting achieves a sound best described as “future-classic.” These guys are keeping busy hitting the road while also prepping their sophomore release ‘Omens.’ Join us today and set off your weekend with some new music to take with you to your favorite DSP!

@skopemag: Where are we talking from today and are you ready for Summer 2019?

F: Hey there! Curtis Peel here. We’re currently in Austin prepping for these three Texas shows we’re playing starting next week (Austin, San Antonio, & Marfa). Not only are we ready, we’re thoroughly stoked for this summer because we’re releasing a new LP, new music videos, live studio videos, and have a handful of shows scheduled in half a dozen states (so far).

@skopemag: When & how did you get the name Futurist for the group?

F: There isn’t really any special story behind the band’s name, but we named ourselves Futurist shortly after I moved to New York City from Colorado in the summer 2008. Before I had been performing a lot of the same music under my own name when I lived out there. It has since become more meaningful though as our sound has evolved to use a lot of new technology in our live sound.

@skopemag: To someone new to your sound – how would you describe it and who would you compare it to?

F: We call our sound “future-classic,” as in we draw a lot of our aesthetic from classic rock bands from the 60s and 70s, but we incorporate a lot of new technology to create this hybrid sound. On the rock end of things, we’ve been compared to Spoon, Arctic Monkeys, Radiohead, My Morning Jacket, and even 90s groups like CAKE, but through the conceptual and stage presence lens, I think we’re shooting for something more akin to Pink Floyd, Flaming Lips, and even Sigur Rós.

@skopemag: Were you all friends before the band or did the music unite you?

F: No. In fact I am the only original member that is still in the band. Like a lot of bands these days, we’ve notoriously gone through so many musicians given the realities of the DIY growth modern bands face. Joey Campanella, who is my right hand man in all of this, is actually the EIGHTH drummer that has performed with Futurist, but when I met him in the summer of 2011, he was definitely the right fit for what I was originally looking for and over time has become a defining aspect of our sound. The other members are either hired guns or long time collaborators. On our upcoming record, Josh Curry (bass) and Robert Sulzer (guitar) have both contributed substantially to the new tunes. As for our summer shows, we have some additional outstanding musicians on the road with us.

@skopemag: What does living in Brooklyn offer you in regards to a music community?

F: That’s actually kind of an interesting question given that Joey and I are both leaving Brooklyn this August, but NYC overall has been a defining, creative foundation for the band. Brooklyn is where I met Dave Brandwein, Producer/Engineer at Galaxy Smith Studios as well as frontman of the Brooklyn band Turkuaz, who has been a huge part of my life, given that he’s co-produced the first Futurist record (War Is Yesterday – 2011) as well as our next two records (Omens – 2019 and a TBD concept record loosely scheduled for 2021. It is also where I met Joey and all of the other amazing collaborators, musicians, visual artists, and more who have driven our formational years. When I moved to the city in 2008, it was the start of that MGMT-esque hipster explosion and there was a lot of promising energy for new rock bands, but now 11 years later, that energy seems to be a lot more fertile in cities like Austin, LA, and a few other locations. We are mostly looking to tour so much more over the next few years anyways, so our home base is currently up in the air.

@skopemag: You have a solid catalogue of music online & live dates. What would you say you are promoting most these days?

F: Our sophomore LP, ‘Omens’ is scheduled for release this September. We’re incredible excited about the new record, so keep an eye out for new singles, music videos, and live studio performances of these new songs we’re going to gradually start releasing between now and the end of the summer.

@skopemag: How do all four of you vibe when it comes to writing & recording new music?

F: I’ve typically written all of the music, but the other guys have contributed heavily to the new record. I foresee us in the future moving more and more towards a collaborative writing process, but I have mostly been working as the conductor of sorts. I’m pretty good at pulling together a bunch of random ideas and forming them into one coherent concept. For example, Joey has had a considerable background listening to and playing funk music, something of which I do not, so there’s a tune on the new record that is influenced by that feel and I pasted together his ideas with something I had lying around and the combination of our ideas has created something very unique that I wouldn’t have necessarily made on my own.

@skopemag: Away from the music what else you do enjoy doing either together or solo?

F: I’m a graphic designer and animator and I create music videos both for Futurist and other bands for a living (www.avalancheartists.com). Joey has worked extensively in music shops repairing instruments, teaching music lessons, as well as a studio and live drummer for a bunch of bands around the NYC area. We both love going to shows and being outside in the sunshine, which can include the beaches around New York, parks, you name it. We’re both pretty focused on the dream right now. We’re getting older!

@skopemag: Since the day you started the group – did your career goals and direction remain the same or have they changed at all?

F: I think the career goals and direction are pretty much the same. The biggest lesson I’ve learned throughout the years is to not be such a control freak about it and just work on myself and my own responsibilities for the projects. With the transient nature of other musicians coming through the group, I’ve learned to let go of people and the situations out of my control. The ones who want to be involved in the project will make it a priority. The rest is out of my hands and there’s always so much to work on regarding my own abilities.

@skopemag: You have shows all over the U.S. coming up. How is life on the road and what is your live show like? Tell me a about your upcoming tour dates.

F: So far so good. Our lineup consists of whomever is available for the dates, but we’ve already played shows in New York, Washington D.C., and Toronto. We’re efficient.

Our upcoming shows can be found here. If you want to know what we’re like live, I’d recommend you just come and find out!