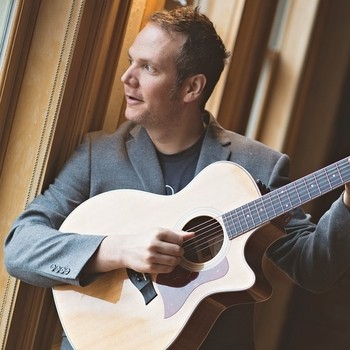 “Where I’m Seen,” the newly-minted single from Iowan Dane Maxwell, doesn’t start with a pitter-patter of the drums. We don’t jump right into some theatrical opening verse celebrating the subject at hand. There isn’t an electrifying guitar solo, and we aren’t sucker-punched with a bulging bassline. We begin with an acoustic string salvo that stands alone amid an uncomfortable silence. Somewhere behind it sits a piano, which will become an important figure later on in the song, but at this moment has very little to say in this first instrumental statement. I wasn’t sure what was going to come climbing out of the shade and into the melodic light when I first listened to this song, but I was surprised to find a warm, consoling voice waiting on the other end of this startlingly deep primer. Dane Maxwell sings softly, but his words are bearing a heaviness that will soon become the only thing we can focus on. “Where I’m Seen” is a very involved listen, but the perspective that it gives listeners on bullying is mesmerizingly provocative.

Maxwell’s lyrics are vehement, fierce, fervent and vigorous, but he sings them with a hesitance that makes them feel like pent-up emotional screams that have been waiting to come undone for far too long. He sweats out every bit of stiff emotion from the verses before letting everything go in the chorus with a series of questions that listeners will be forced to answer for themselves once the song is over. I appreciate all of the detail in the instrumentation here, but there’s just no getting around how powerful the lyrical content is in “Where I’m Seen.” I could write an entire review centering on the way that Maxwell uses a traditional prose to go against the most traditional way of writing pop lyrics, and for that matter, I could probably devote as much time to figuring out how much of this single represents his own life story as opposed to how much of it was meant as a running commentary about the way that society and, more significantly, our relationships with each other, have fallen into ruins in the most deplorable of ways, but that’s all semantics. “Where I’m Seen,” both musically and lyrically, effects listeners on a level that you just have to experience for yourself to completely understand.

In a tizzy of electronic distortion, Dane Maxwell’s debut single reaches the finish line, but the memory of its melodic roil is one that is tough for any music lover to shake. I’m hooked on what Maxwell is doing with his sound right now, and based on the little that I’ve learned about his personal life, he’s never been one to back down from a challenge, no matter how daunting it might be. Getting into the music business is, despite what some people will tell you, a lot harder than making it in most any other artistic industry is, but with an original style and a drive to tell an imperative story that is as much his as it is ours, Maxwell is poised to do great things in his career.

The music of DANE MAXWELL has been heard all over the world due to the promotional services offered by Danie Cortese Entertainment & Publicity. Learn more here – http://www.daniecorteseent.com/