After a long journey through different musical and life experiences, two young minds found themselves in the summer of 2012, almost by accident, in a foggy and gloomy wasteland located between Turin and Milan. David-Kristof Acs (son of the Hungarian Maestro, Director of conductor Janos Acs) and Federica Sara Falletta (former backup singer Rai), gave life to a project by European sounds, not to mention a certain melodic Italian culture. The mix blended perfectly into what would become “Illacrimo

In January 2018 they released a new single, “Sabbia al vento”, an arrangement in Italian of the famous “Homok a szélben” by Koral, with strong reception from the media around the world. Even the original Composer, Balázs Fecó , applauds them for the song. 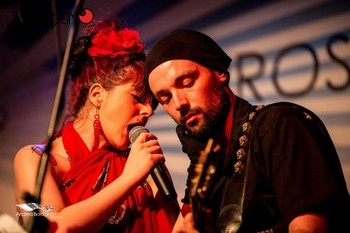 In April 2018, they signed with MAF Records an exclusive contract.

You can find them in all the digital stores of the world: iTunes, Amazon, Spotify, Google play, KKbox, Gaana, Music Yandex, Rockit and more… under Music and Film Records.