Is that really Sami Chohfi, singing sweetly over an acoustic guitar? The frontman of the incendiary Blue Helix – the man who has, for the past decade, kept the Pacific Northwest safe for melodic hard rock– is sitting still. Could it be? Dedicated fans – and there are legions – are going to need a moment. 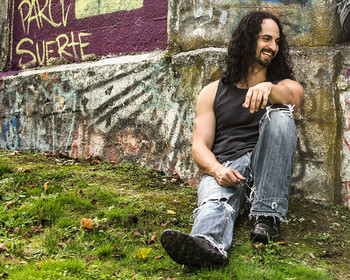 Yes, indeed, the aptly-titled “It’s Just Me” is a fresh look from the fiery Chohfi, who typically soars over near-symphonic accompaniment. While much has changed, there’s also plenty for followers of Chohfi and Blue Helix to recognize. “It’s Just Me” has the same sturdy construction, candid subject matter, and strong instrumental performances that we’ve come to expect from a Chohfi recording. Although his delivery is hushed and conversational, it’s no less intense than he’s ever been. Without heavy guitar, bass, and drums backing him, he’s left to be honest, raw, and incredibly vulnerable. While Blue Helix was always best known for high-energy rock, the band has a folkier side, too. As it turns out, the new direction for the singer-songwriter is very similar to the one he’s always followed.

It’s an approach that has earned Chohfi recognition on several continents and kept him going strong since the beginning of the millennium. Although Blue Helix is, for good reason, associated with Washington State, Chohfi has deep roots in Brazil, and his music has always resonated with South American listeners. The rocker has always thought globally: he’s always been open to musical influences from all over the world. He’ll shoot a video in Africa (as he did with the brilliant “Masters of War” clip), roar from stages in Sao Paulo (as he did at a December concert in Brazil’s largest city), and proudly represent the true believers in the Seattle rock tradition.

The clip for “It’s Just Me” might seem superficially small-scale, but look closer: it presents Sami Chohfi as a citizen of the cosmos. The video opens with images of the rocker unfurling a message in a bottle – a missive sent to him from far across the oceans. Director Jon Meyer shoots Chohfi under vast skies and frames him against broad seas; he plays his acoustic guitar at the end of a wooden shipping pier, surrounded by water. When you are a child you are pure, innocent and always trying to find who you are. “It’s Just Me” reminds us that we had the answer all along. The message is clear: the sound and the song may be intimate, but the singer’s horizons are limitless).