The smoky timber of the vocal track in Midnight Shine’s “Heart of Gold” slips through the rambling rhythm of the guitars and texturizes Neil Young’s legendary lyrics with an exotic glow that speaks to the shared Canadian roots of the band covering the song. This supple serenade is central to bringing the dirge of the strings and the gentle drumming together in the new single from Midnight Shine, and despite the words switching from English to Cree midway through the song, the message in the narrative never disappears from the emotionality in the music, and moreover, the soulfulness of the singing. 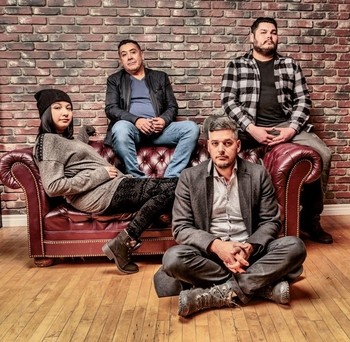 There’s a lot of components to Midnight Shine’s version of “Heart of Gold,” and to be honest, I found it a little overwhelming in cursory listens. Unlike previous cuts from the band, there’s a lot relentlessness to this tempo, and more importantly, the relationship that the bassline has with the drums, and while it’s an interesting change of pace for their sound, it doesn’t suit them in this song as well as it would something more revved-up in rhythm. I would have preferred to hear more out of the percussive track, but at the same time I can see why they wanted to keep the lion’s share of our attention on the vocal.

The music video for “Heart of Gold” plays out a lot smoother than the single does by itself. Right off the bat, we’re engrossed in a lot of images that are as textured as the music that’s accompanying them is. We aren’t just hearing the emotion in the song, but seeing it as well. It’s a basic construct at its core, but in contrast with the recording, it actually balances out the overdone elements in the mix with a stimulating (but simple) visual experience.

Midnight Shine should really explore making some heavier music in the future. The main riff in this track is loaded with a sensuous overdrive that has the potential to be manipulated into some devastating tones if it were filtered through the proper EQ. I’ve mostly enjoyed what this band has come up with so far, and I think that in the grander scheme of things, this cover will ultimately be a good stepping stone for their career moving forward. Critics often question the motives of bands that decide to start recording classic songs like this one, but it isn’t hard for me to decipher what Midnight Shine’s underlying goal is here.

It’s admittedly a bit overambitious for what I want in a cover song, but “Heart of Gold” is a track that I would recommend to casual rock fans just the same. Nothing will ever be able to beat the Neil Young version of this tune, but considering the enormous shoes that Midnight Shine are trying to fill in their latest single, I suppose that coming up a little short is to be expected, and rightfully more than excusable.