In a lumbering pitter-patter that echoes a vibrant bass strutting its stuff in the foreground, the neatly arranged drums in Little Bird’s “gHost” are intent on capturing the lion’s share of our affections in the Charleston, South Carolina band’s latest single, but they face some serious competition from an angelic vocal and a set of glistening string melodies that accompany them. With surgical precision, they dart between the left and right speakers and weave an inescapable web of romantic rhythm around us, and before we’ve even reached the chorus, trying to evade their grasp becomes inarguably futile from almost every angle. 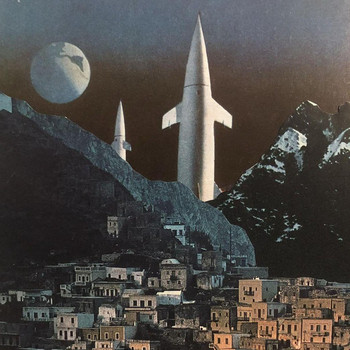 The vocal bonds to the strings and never separates from them amidst all of the violent twists and turns that the grooves can discharge. It would be awfully easy to get lost in the sonic waves of mind-altering psychedelia were it not for the focused nature of the lyrics, and Little Bird makes sure to keep them front and center in the mix at all times, next to the bass. Equalized with a punishing bottom-end, the guitar parts here are as heavy as rocks, but they don’t prevent the sexy serenade from soaring into outer space and orbiting above us like a distant, all-seeing satellite.

These beats are big, and by big I mean huge, and through some strange miracle of mastering, they don’t intrude on the string arrangement, even when they’re bearing down on the chorus with demonic devotion. The light seasoning of harmonies over the groove in the main percussive part in the verses would seemingly create a lot of discord on paper, but in “gHost,” it channels a reverent ambience that makes for a wonderful addition to the track in its complete form. If this is what pop music is going to sound like in the 2020s, then I might have to reassess my opinion of the genre as a whole.

A vacuum effect in the master mix sucks us out of our chairs and takes us right into the studio with Little Bird from the start of “gHost,” and inside of the refrain from the chorus, it renders a whirlpool-style vortex of kaleidoscopic keyboarding and bass that could devastate a nearby china cabinet at the right volume. As much as surrealism has been making an impact on everything in pop music both in the underground and in the mainstream, I wouldn’t consider this track to be a product of a burgeoning revolution. This is Little Bird being Little Bird, and it’s as original a single as any they’ve produced.

“gHost” will haunt your dreams with its delicate ominousness this April and induce a trance that few other songs will this year, but I don’t think it represents the creative peak of Little Bird in the least. This quintet is getting better with age, and if this is just a sampling of what their new record Proxima is going to contain, I think it’s safe to say that it’s going to be as big a hit as this single is, and could possibly serve as an important segue for the group into the mainstream market.