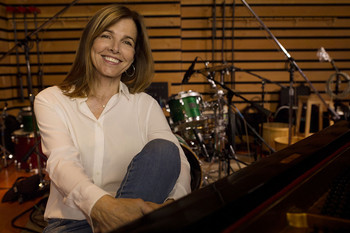 If you’ve ever walked on the streets and steps surrounding Telegraph Hill in San Francisco (and if you haven’t, you really should), you’ve probably wondered about the residences on those steep and spectacular slopes. Who lives in those lovely houses in the trees, and what sort of relationships do those people have with the surrounding neighborhoods below? Well, singer-songwriter Liz Kennedy makes her home in the shadow of the Coit Tower, and she’s here to tell us all about it. “Hike Up Your Socks” is a love letter to Telegraph Hill, historic North Beach, and San Francisco in general. Kennedy presents herself as a woman enchanted by her surroundings and deeply invested in her neighborhood, and the message of her clip is clear: a life well lived, she argues, is one that’s deeply rooted in the local community.

Kennedy’s late husband was a good citizen and a good neighbor, and “Hike Up Your Socks” was, in part, inspired by his passion for North Beach and the many relationships he’d cultivated while living there. But it’s also a powerful reaffirmation of something that fans of Liz Kennedy already know: the artist is a genuine San Francisco resident and a carrier of her city’s storied folk tradition. Since the 1960s, the Californian style of folk has foregrounded idiosyncratic perspectives, wry personal narratives, engaging characters, good humor, flashes of insight, and above all, camaraderie with other artists – and arguably, nobody’s been truer to that communitarian project than Liz Kennedy has. Her five albums are textbook examples of winning San Francisco folk, and “Hike Up Your Socks” radiates local pride. The witty lyrics namecheck area landmarks (Mario’s Bohemian Cigars and Stella’s Pastry if you’re following along in your guidebook), extols the benefits of pedestrianism, and encourages you to greet passersby with the warmth of a good ambassador. Because, really, why wouldn’t you?