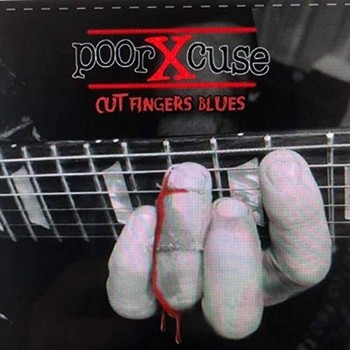 Out of a dead silence, Poorxcuse comes alive with an imposing wallop of bass and drum destruction in the opening bars of “Miss You Babe,” the new single from their latest album, Cut Fingers Blues. Guttural guitar riffs crash into each other and attempt to smother us with their blustery grooves, but the bassline isn’t letting anything come between us and its dense, swampy tonality. We’re engrossed in the rhythm of the drums from the get-go, and because they’re as loud as any of the string instruments are in the mix, they become just as sterling a component in the narrative of the lyrics as the mild melody emitted from the guitars is. “Miss You Babe” is blues at its most unabashedly assaultive, and it’s one of the most solid singles I’ve reviewed all year.

The video for the song is basic and focuses solely on Poorxcuse playing the track inside the studio without anyone or anything to distract them from the music. In many ways, it sort of summarizes the means in which this band has crafted their provocative blend of heavy blues-rock – it’s just them, the music, and the evocative energy that they cultivate when sharing a small room together. It’s a refreshing change from the overdone cinema that has replaced simpler music videos like this on the commercial side of the dial, but it’s far from the self-righteous “retro” redundancy that some rock bands have tried to pass off as legitimate expression amidst all of the renewed interest in everything dubbed vintage by critics.

There’s no arguing that the vicious guitar play is the centerpiece in all of the discordant decadence that transpires behind the starring vocal in “Miss You Babe,” but I really don’t know if this song would be the tour de force that it is without its striking percussive thrashing. The grooves here are larger than life, and Poorxcuse makes no attempt to mask their gargantuan size in this single; instead, they end up designing every riff around their commanding beats, which guide us through the sonic firestorm and bring us into the clear without ever breaking stride or losing sight of the unassuming hook in the chorus. I can see why they love playing this song live as much as they do – if it makes this kind of an impression in cursory listens over headphones, I can’t imagine how powerful an impact it would have on a crowd full of revved up rock fans.

Anti-formulaic, supremely heavy, bursting at the seams with old fashioned charm and rife with an engaging rhythm that sizzles just as profusely as any of the riffs do, “Miss You Babe” is without a doubt a new creative highpoint for Poorxcuse and one of my personal picks for rock n’ roll buffs who are in search of a tenacious tonality this spring. In both the single and the music video, the addictive grooves that this song boasts will sell even the most discriminating of critics among us on the skillset that these amazing Aussies bring into the studio with them every time that they make a new record. While 2019 is likely to see some really profound releases from across the pop music spectrum, this track is undisputedly among the cream of the crop.

The music of Poorxcuse has been heard all over the world due to the promotional services offered by Danie Cortese Entertainment & Publicity. Learn more here – http://www.daniecorteseent.com/