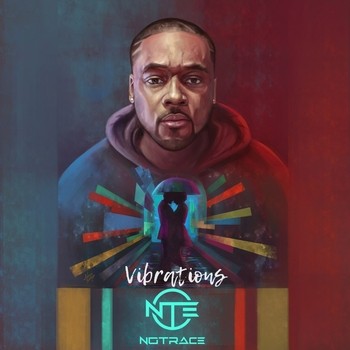 With the release of his new single “Vibrations,” rapper NoTrace seeks to reshape the identity of modern hip-hop through textured musicality, socially conscious lyrics and, perhaps most importantly, smart producing that balances out slick vocal striking with defined instrumentation. “Vibrations” sees NoTrace teaming with melodic crooner Glenn Travis, and though the two have a phenomenal chemistry that really brings the poetry to life here, there’s never a question as to who the real star of the show is. Fans of edgy rap that speaks to one’s emotional side as much as it does our thirst for big beats would be well advised to give this single a listen this month.

“Vibrations” sports a super heavy mix, but remarkably, the vocal track itself is light, airy and effervescent amidst the grind of the instrumentation in the background. This creates a brooding contrast that really captures our attention right out of the gate and sustains it for the duration of the song’s nearly four minutes of running time. I think that Travis’ parts would have been particularly slighted in the final product were this concept not utilized, but fortunately for us, NoTrace’s keen attention to detail is firing on all cylinders in this song.

While it’s not all that common to come across in hip-hop anymore, “Vibrations” benefits significantly from its intriguing instrumental arrangement, which personally I found to be just as evocative and communicative as the lyrics themselves are. The piano that echoes from a distant backdrop as NoTrace spits furious rhymes in our direction comes off as arduous and full of yearning, and to a certain degree is responsible for generating the mood that the verses add some definition to via their articulate prose. You don’t have to be a hardcore audiophile to notice some pretty big stylistic differences between this single and other Billboard fodder of the moment, and this is one of the more glaring ones.

These are among some of the strongest lyrics that I’ve had the pleasure of reviewing in a little while, and through NoTrace’s decisive flow they make the somewhat familiar rhythm of the beats a bit more exciting than it would have been otherwise. The sway of this track is reminiscent of a lot of early 2000’s hip-hop gems, but as it’s packaged by NoTrace and Glenn Travis, it’s as fresh and original as they come. The hooks aren’t smothering, but to say that this song isn’t an addictive jam would be completely untrue.

A reverent slab of melodic hip-hop in a time for the genre that could really use some humbling, “Vibrations” is an enamoring single from NoTrace that sees his brand continuing to evolve and encompass a deeper grasp of emotionality. He’s not afraid to go deep with us here, and though the lyricism is warm and personal, it’s not hard for us to relate to thanks to the wit of its unparalleled author. I’m very excited to hear his forthcoming EP, and this track is without a doubt one of the biggest reasons why. He’s got talent, and at the moment, he’s exploiting it for everything its worth with fabulous results.