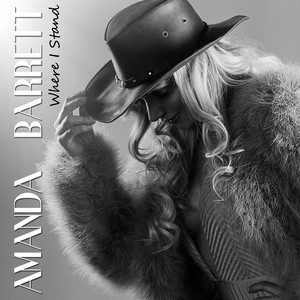 On the whim of a galloping percussive groove, “Where I Stand,” Amanda Barrett’s first official single, comes to life in an explosion of distorted riffs and homespun harmonies. The drums take a second to warm to the rhythm of the strings, but it isn’t long before they’re clicking into place with the sterling fretwork from the lead guitar and sultry slickness of the bass. As black and white as the rigid percussive track is next to the fluid guitar play, it isn’t completely colorless in the master mix, which makes a point of amplifying every blissfully quaint facet of texture within the composition. Once Barrett starts to sing, our hearts melt on the spot under the glare of her white hot melody, and trying to turn back from the path that we’ve started down is swiftly proven futile.

Barrett sings “You can’t win unless you go all in / You gotta take a risk, there’s no ‘could have been’” in the introductory verse of “Where I Stand,” and you can tell that she means every single word that’s slipping from her lips into the atmosphere around us. She takes her time spreading out the harmony created between her voice and the strings across each one of the lines that follows, and although she doesn’t hold anything back from us in her execution of the lyrics, it’s clear that she’s building our tensions up for a fiery fever pitch in the chorus, which looms over the horizon like a beautiful setting sun.

The guitars rev up the overdrive as we get into the central hook in the song, but there’s nothing powerful enough to turn our attention away from the country drawl of Amanda Barrett when she’s laying into the chorus’ agile verses. She’s an unstoppable force of nature at this point; even if a more traditional guitar solo were to try and impart a thunderous musical bend to the bridge, we’d still be left itching for her to return to the mic and lead us through this storm of strings and into the Promised Land. Barrett never lets any of the immensely textured grooves interrupt her defiant discharge of the lyrics, and while this is only one of the songs comprising her new EP, it’s more than enough to justify all of the interest that critics have taken in the forthcoming release.

Rocking a bombastic swing and a folky melody in the center of all its lightly augmented layers, Amanda Barrett’s “Where I Stand” reaches its conclusion in a foggy outro made up of little more than a lingering strand of amplified feedback that hints at more primal chest-pounding grooves waiting for us in the future to come. There’s really no other way to put it – Barrett’s very first release is a slab of modern country music that has nothing in common with the commercialized angle abused by her American counterparts and shares much more with the legendary work of timeless troubadours who paved the way for her career decades ago. If she keeps at this current pace, I wholeheartedly believe that this will not the last time she makes headlines with her unmatched sound.