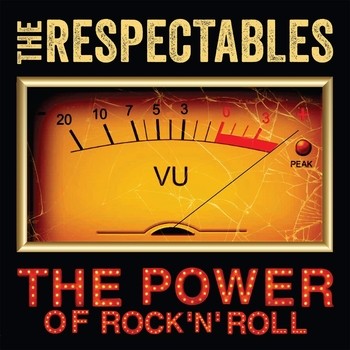 The burgeoning bassline that greets us at the start of The Respectables’ The Power of Rock ‘N’ Roll comes crashing through the silence and wraps its heavy arms around us in a tender embrace that will extend into every song that follows it. The music video for this title track plays out more like a dream than a standard video, grabbing us with its translucent colors and putting us on the back of a motorcycle for a trip into the unknown pleasures that the wide open highway is home to. As much of a spellbinder as it is, it’s nothing compared to the intensity that we’re going to encounter in the opening bars of “That Girl,” a song that effectively primes us for the whirlwind of tonality that the band is about to suffocate us in.

“The Shotgun Seat” comes blazing through the melodic remains of “That Girl” on the whim of a bristling drum beat that stampedes between the white hot guitar riffs and leaves a trail of vicious grooves in its path. While not the space-bass beatdown that “Give Some” is, its studded rhythm definitely raises our heart rate and prepares us for the shift in gears that’s waiting just around the corner. “Give Some” sways pendulously and smothers us in a volatile bassline that quakes the ground beneath the speakers and asks anyone who thought rock was essentially dead in 2019 to carefully reassess their opinion, at least before making such rushed judgements about the music that The Respectables are churning out in this LP.

“Wheel in My Hand” sees the band adding a little more country to their sound as The Power of Rock ‘N’ Roll presses on, but it’s not even close to the blustery bucolic poetry that “Mardi Gras” boasts with pride. As exciting as the New Orleans festival that it was named for, this track serves as a great bridge between the album’s first and second acts, which are distinguishable by their folksy tonality above all else. “As Good as Love Gets” starts to slow down the pace of the music and gives “Oasis” and “18 Wheeler” some space to tug at our heart strings as we near the record’s stirring conclusion. I actually think that The Respectables are a bit more relatable in these acoustic-driven songs, but to be clear, none of this material feels thrown together like a hodgepodge collection of studio nattering – everything sounds deliberate and cohesive with the central theme of the music.

The solo effort “Limousine” contributes an old fashioned, bluesy dirge to The Power of Rock ‘N’ Roll, and with the effervescent grooves of the Heartland rocker “Highway 20,” the album comes to a close in a tizzy of sonic ribbonry produced exclusively from the string section. There are so few records that make as big an impression on me during virgin listening sessions as this new LP from The Respectables did, but its charm hasn’t worn down as I’ve reexamined its tracks time after time since their initial release back in September. This is an album for the ages, and even that statement doesn’t really do the music here justice.