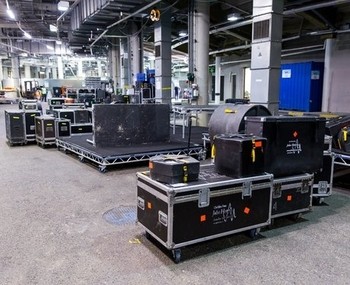 How overpaid musicians can make life miserable for the concert production crew.

Besides signing a concert or tour contract, artists and performers (or their management team) frequently send the venue or booking management an accompanying “rider.” The rider contains a set of demands typically technical, containing a stage-plot, lighting instructions and what kind of audio support equipment is needed in order for the artist to put on a successful show – often stipulating that failure to meet these demands will be met with cancellation and insistence on being paid in full for the cancelled show.

Technical riders can be interesting to read from an audience, or a musician’s perspective, but usually much more interesting, and revealing of the artist’s personality, is the “hospitality” (i.e. food and drink) rider. These riders have often been leaked and shared over the years and met with ridicule or sympathy pending the artist and the type of demands. For instance Paul McCartney is vegetarian and reasonably insists that any furnishings backstage do not use or display leather or animal skins; alternatively, Slipknot insist on being provided with (among other things) six cans of Chef Boyardee ravioli. Some riders are protective of the artist’s sponsorship prohibitions and contractual obligations. Beyoncé can only be seen with Pepsi products, both back and onstage. Some riders are quasi “medical” —both vocalists Ozzy Osbourne and Frank Sinatra demanded that there be an Ear, Nose and Throat Doctor nearby to be able administer B-12 shots or Decadron if needed.

Given that left to their own devices – all promoters would serve beer and chicken backstage at every event, so artists who play several nights in a row have “calendared” requests so that the menu will change daily. But the Canadian Arena Prog-Rock band Rush took this concept to extremes by insisting (besides a detailed selection of beers) that Meyers Dark Rum be provided on Mondays, and Martell Cordon Bleu cognac on Wednesdays. Rush’s rider also notes that for their Sunday liquor needs” “Please ensure that it is the top Napoleon Courvoisier –not the VSOP!” Some artists are clearly planning to entertain a crowd before, during or after the show. Kevin Hart’s rider demands promoters provide him with eight bottles of vodka, requiring two bottles each of Ciroc branded Vodka flavors: peach, coconut, amaretto, and pineapple. The most absurd rider I came across was described by John Seabrook in an article for the New Yorker (published April 2017), listed the Who, Bob Dylan, the Rolling Stones, Paul McCartney, Neil Young, and Roger Waters to appear at “Desert Trip” a classic Rock weekend Festival held on the grounds of Coachella, booked by the California based Agency AEG, who claim to be the world’s leading sports and entertainment company, for performance fees of between three and five million of dollars per act. Each of the acts were allotted an acre of land to rest, and the Rolling Stones plot included a 36 meter air-conditioned running track for Mick Jagger to sprint up and down.

Metallica and Guns n’ Roses mock each other backstage, and James Hetfield recites from the Guns n’ Roses rider: “One cup of cubed ham . . it’s got to be cubed so it can get down his little neck” of Axl.

The most entertaining concert rider was written by road crew member Jos Grain for Iggy Pop and the Stooges which ends with an addendum proposal for a reality TV Series to be called” “Dead Dog Island” – wherein the contestants on a tropical island have to identify the breed of a dead dog and cook it in a variety of ways. They are given blunt knives and clown shoes to wear, and have to eat the dishes they prepare over a number of weeks. There could be a celebrity version of the show, Cher and Stevie Nicks are suggested as show candidates. Needless to say the show concept was not picked up by any TV executives.

Besides the inevitable details about ginger and Chinese Gunpowder tea Jos Grain’s rider asks for a Bob Hope impersonator backstage, requesting “Somebody dressed as Bob Hope. Doing fantastic Bob Hope impersonations and telling all those hilarious Bob Hope jokes about golf and Hollywood and Bing Crosby. Oh God, I wish I’d been alive in those days, so Bob Hope could have come and entertained me before I went off and got shot. What a joy they must have experienced … a big bucket of ice or a refrigerator.”

But seriously: rock and roll, rap and country stars should take a lead from Hollywood and start to insist on “inclusion” riders. By inclusion – I mean that headline stars at major Festivals and packaged tours should demand that the promoters book democratically across gender and racial lines. In 2018 Pitchfork analyzed the rosters of 23 Major Festivals and found: “Only a quarter of artists booked across 23 of the summer’s biggest fests were female or groups with at least one female member.”

Festival & Concert Tour Promoters will respond to ticket sales, so if you vote with your feet (or your wallet) the concert landscape will evolve – albeit gradually. Unless you actually want to go to nothing but male-only concerts! We’ll know the times have changed when Metallica insists on having a Kate McKinnon impersonator backstage doing Lady Gaga routines to entertain the crew.