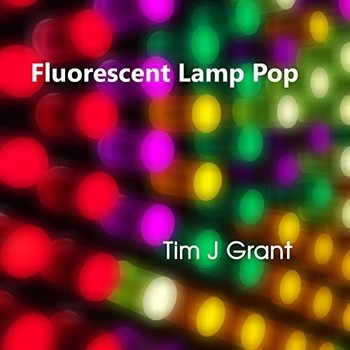 An anxious keyboard comes alive as we enter “Bullseye,” the first track in Tim J Grant’s brand new album Fluorescent Lamp Pop, and it will soon be joined by an ethereal vocal from the one and only Ina Bravo. This orchestral club anthem blends the electronic with the organic in a bulging show of strength that beautifully sets the tone for the fourteen songs that follow it, and as we transition into the Kirsa Moonlight-sung “I Want to Know,” it becomes quite clear that Grant wasn’t content to develop a stock pop record in his latest studio offering. He pulls out all the stops in this album, which features no less than nine different vocalists but progresses with the same fluidity that one would typically find in a bombastic rock opera.

Psychedelic pop meets second generation post-punk in the soft and cerebral “I Want to Know,” but its melodic sway is shattered once we fall upon the discordant noise rock of “Goodbye Was Overdue,” sung by the unparalleled Tara Lynn. Its abrasiveness is softened by its accessible hook, much as the exotic vibrancy in Ahbee’s “The Roads” finds its match in a spacey pop rhythm that prevents the track from going completely off the rails compositionally. The exceptionally bright harmonies that come swinging at us in the Krysta track “The Accidental Life” keep the upbeat tone going, but the psych/folk balladry that Bellz sports in “You Fooled Me Once” is easily among the most reverent that I’ve listened to this year.

Intimate poetry is flanked with an angelic acoustic strumming in “One Too Many Times,” the lone contribution from the sensational Amy Kirkpatrick, and it isn’t the only lyrically-driven song that warms up the midsection of Fluorescent Lamp Pop. Krysta dishes out some very textured verses inside of “Lighting Your World,” Ahbee adopts a gothic strain of indulgent post-punk in “Stand (With Your Heart in My Hand),” while Ina Bravo commands an urgent alternative rock vitality in “Fooled Another Man” that is evened out by a neon-tinted master mix that is the epitome of clubby songcraft. In Cheraine Eugene’s “Don’t Miss the Verse,” Grant experiments with the pastoral before diving straight into countrified grit with the Bellz song “Never Tried Dreaming,” in what I would consider to be the album’s most abstract pair of tracks, but these rustic efforts don’t minimize the impact of the more cosmopolitan “The Affair” in the slightest.

Grant slows down for a second to stretch his instrumental legs in the erotic “Dewey Eyed Oblivion” before bringing us full-circle with the industrial dance beats that guide the visceral “My Beautiful Soul” and the sublime vocal performance from Judith Amelia that it’s defined by. Though bursting at the seams with a plethora of creative content that rarely – if ever – makes itself vulnerable to traditional categorization, Fluorescent Lamp Pop is nevertheless a brooding, immaculately-produced record that hardcore music aficionados should consider required listening this season. It’s not the cookie cutter pop music that dominates the Billboard charts, but that’s precisely what makes it such a thrilling, unbelievably engrossing listen for audiophiles and casual rock fans alike.