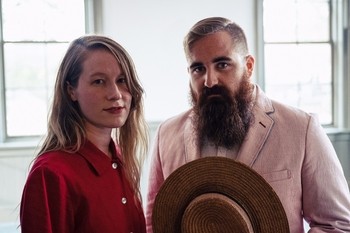 With whimsical lyrics and a solid musical grounding in Americana tradition, David Mayfield and Abby Rose are taking advantage of their combined songwriting skills and tight harmonies to propel their new duo group, Cave Twins, into the Indie music spotlight. Each artist has seen success separate from their new pairing — as solo acts, within other groups, and behind the scenes in the producer’s chair. Together Mayfield and Rose complement one another’s musical stylings to create a pleasant, light hearted mix of what some have called “cute little songs and shorter, cuter little songs”.

Their self-produced debut album, Best Friends for Now (releasing March 15), provides an uplifting outlook on the notion of friendship and how adult humans relate while maintaining a focus on endorsing science and a peaceful way of life, two causes which are deeply important to the pair. Cave Twins have been compared to other superb indie Americana duos including Moldy Peaches and the Civil Wars.