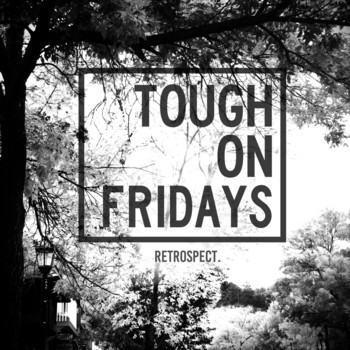 Tough On Fridays’ “Retrospect” is a tough girl, anthemic rock song. This group is tougher than The Go-Go’s, but not as hard rocking as The Runaways.

The track begins with a thumping drum beat, which introduces a chugging electric guitar rhythm. It’s loud enough to be alternative rock, but not fast enough to be punk. It’s an all-girl band, one that sings harmonies, but these are only necessary complex vocal parts, and not stacked pop vocals the way The Go-Go’s and Bangles did it/do it.

Lead vocals are handled by the group’s blond bassist, and “Retrospect” is more of a regretful love song, than an angry kiss-off. The three-piece features the kind of camaraderie one usually only finds in girl bands, in that two of its members have been friends since grade school. The group is from Texas but are by no means a country music act. Although their press material quotes an admirer calling them the female Nirvana, one doesn’t hear much to make that bold comparison. They may cuss a little bit in the lyrics, but then again, most all musicians curse these days, so that’s nothing unusual.

The band originally released this song back in 2017, so it’s one they’re already familiar with. It’s a strong, powerful track that asserts the act’s hard rock credentials. It’s always good to hear solid rock & roll. Sure, it’s a little retro. Then again, most anyone playing fairly traditional rock & roll these days would be considered a little retro. One doesn’t hear any modern musical pitfalls. There are no concessions to diva pop or R&B. Instead, the girls focus on muscular hard rock.

Even though they’re tough-skinned musicians, they nevertheless still retain a lot of femininity. They’re not raspy singers, nor are they messy players. Instead, they’re both neat and precise. This is about as straight forward as rock & roll gets. Every instrument is distinctive and essential in the mix. It doesn’t rely on a lot of distortion, the way the Nirvana did. They’re also not mush-mouthed, like Nirvana’s Kurt Cobain. There’s almost a business-like professionalism with the way Tough On Fridays go about creating this concise track.

It’s not clear where the group’s name comes from, but it’s a good one. It could mean anything. It likely is nothing like that Cure song, “Friday, I’m in Love,” though. This is a group that is too no-nonsense for that. “Friday, I’m in Love” is an unusual song in The Cure’s catalogue, anyhow, because that English act got its start as a near-suicidal goth band. In love? On a Friday? Tough to believe, after following Robert Smith’s early work.

Yes, girls still pick up guitars and rock out. Tough On Fridays is proof of that. These women rock, and rock hard. They’re more the modern-day Breeders, than contemporary Nirvana. No matter what comparison you choose to make, though, it’s difficult to get way from the fact that this new group is something special. Teen girls can love their Ariana Grande and Selena Gomez, but those two girls come off more like spoiled brats, than true artists. Tough On Fridays, though, are clearly the real deal.