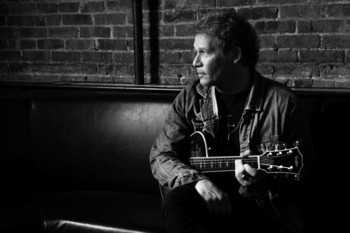 During the chorus to “Million Miles Away,” Gary Douglas sings how he still believes the world can change for the better. He sees a light, but that light seems a million miles away. Hence, the song title.

The vocal arrangement to this one includes the singing of “hallelujah,” which makes this song, about hard-fought hope, something with a bit of a religious fervor. The song is built upon gentle guitar and piano and includes a saxophone solo. Douglas’ workman-like lead vocal helps create a Springsteen-esque, E Street Band-like track.

The song begins with Douglas asking the listener if they’ve ever wanted to just stay in bad and put the pillow over their head. That’s how he felt when he got the idea for this song. Douglas doesn’t go into a lot of specific detail about the things troubling him. It could be political. It might be social. It may even be something more personal. We don’t know for sure.

When Douglas sings “hallelujah,” it’s more a wish than a churchy celebration. It’s almost as though he’s attempting to will his way back to a better world. He even takes personal responsibility to make that happen. Change must start somewhere. Although this song is sonically not anything like the Michael Jackson hit, “Man in the Mirror,” part of its lyric mirrors that popular song’s overall sentiment. Douglas believes he can’t just shout at the world, demanding that it change for the better. He, instead, needs to be the one that sets the example. The one that takes that first step forward.

Along the way, this song references Superman. Rather than flying to save the day, though, Superman in Douglas’ song has hung up his cape. This could have been him, too. Just surrendering. Giving up. Calling it quits.

Much like Springsteen, Douglas looks at the ugliness in the world and chooses to fight it, rather than flee from it. Doom and gloom rockers are famous for pouting, crying, whining and surrendering to the negativity of the world. Douglas, one senses, could never be one of these tragic souls. He can see a little light in the far distance. It may seem like an impossible place to reach, but he’s at least going to make strides toward it, rather than, as he first considered, staying in bed and trying to ignore it.

Curiously, Douglas is a lawyer by day. He spends his daytime hours fighting for such things as workers’ rights, and against corporate greed with his law skills. Springsteen humorously admitted during his recent Broadway run that – although he sang about working class men and women – he never actually held a 9 to 5 job, like those that people his songs. He’s always been a rock & roller, since he was quite young. Douglas, on the other hand, doesn’t just sing about fighting injustice; he also fights the wrongs of this world in courtrooms.

The Gary Douglas band is old school, both lyrically and musically. However, these are school lessons that always need to be taught. Ever since the Garden of Eden, humans have been messing with God’s creation. Where people mess up the good things, there’s a need for warriors to bring these wrongdoers to justice. Gary Douglas pulls double duty in that fight for justice, both in the courtroom and on the rock & roll stage. And when this song plays, at least, hope just feels a bit closer.