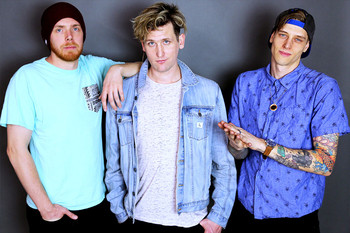 Welcome to Water District, where you will find authentic pop rock with a modern emo spin. This exuberant Los Angeles trio blends influences from the indie rock sound of the 2000s with fluid new wave melodies and lyrics. Water District re-imagines pop rock for the new generation, who are ready for a return to emotionally sincere and harmonious music.

Inspired by his artistic upbringing in Southern California – his mother is a painter, and his father was a mod rocker in the 1960s – lead singer Tice Griffin recorded his first demo when he was 19 and went on his first West Coast tour shortly thereafter. While living in a van outside of a studio where he worked as a technician, Griffin envisioned himself as the front man for his own band and committed himself to pursuing his dream. Since then, Water District has released a demo album, an EP and various singles, to critical acclaim and national airplay. The band is rounded out by Erik Williams on drums and Ryan Scottie on bass.

In step with the nostalgic vibe of “TAKE OFF YOUR CLOTHES,” the video is colorful and classic. The band plays in a front of a white backdrop intercut with a trio of bubbly female dancers in vibrant outfits who move against colorful backdrops. A split screen and interstitial scenes between the band and the dancers climax to a fun reveal: the boys, not the girls, are the ones who are being undressed. The video is a throwback to a simpler time of sexuality, with influences like Blink 182 and Britney Spears. But make no mistake: “TAKE OFF YOUR CLOTHES” is a video made for now, with the gender roles of the 90s reversed.